SPRINGFIELD, OREGON--Private services will be held for Harold "Dutch" Erbe of Springfield, who died April 24, 1998, of complications from a stroke. He was 81.

Erbe was born September 28, 1916 in Osage, Iowa, to Judson and Mathilda Erbe. He attended schools in Osage.

He married Marilyn Warrington on October 12, 1942, in Osage. She died March 8, 1980. He lived in Osage and Idaho before moving to Springfield in 1946. During World War II, Erbe served in the Army Air Corps. He flew out of England with the 93rd and 392nd Bombardment Groups as a ball turret gunner on a B-24 Liberator bomber. He earned an Air Medal with three oak-leaf clusters. Erbe worked for Springfield Plywood and for Georgia-Pacific for more than 20 years. He retired from the Springfield School District in 1979.

Survivors include a daughter, Carol of Springfield; and a sister, Ada Bareika of Kenosha, Wisconsin.

Major-Fredericksen Springfield Funeral Home is in charge of arrangements. Memorial contributions may be made to The Collings Foundation, B-24 "All American" river Hill Farm, Stow, MA 01775. 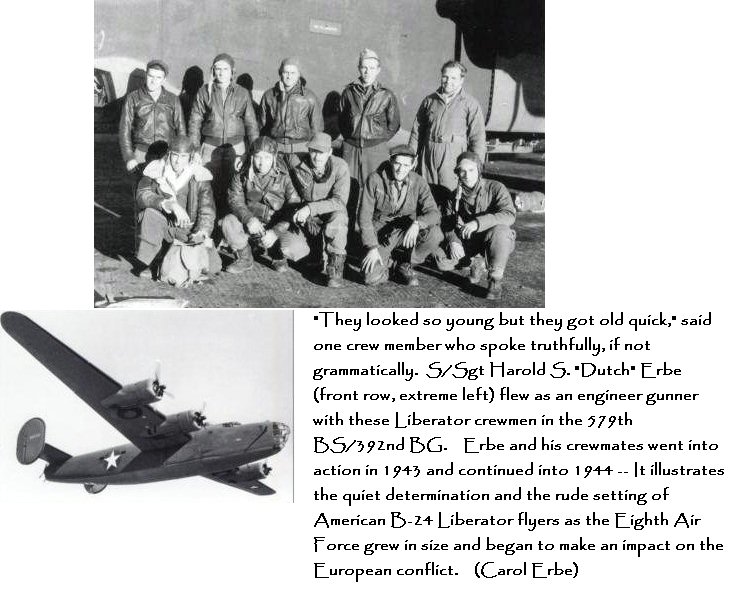