James Dunlap was born in Scotland in 1798, immigrated to America through Upper Canada, and settled in the Michigan Territory. It was there that he met Catharine Harrow who was born in 1803 and was one of eleven who constituted the first class of a Methodist Society organized by John K. Smith.

Alexander, Cornelius and Fletcher moved to Iowa prior to the Civil War with Cornelius going to Mitchell County where the Mitchell Gazette was owned and operated by Cornelius and later by Fletcher. On January 6, 1862, Cornelius was elected as a county Supervisor from Stacyville, but he served only a short time.

With multiple regiments being raised for the war, enlistments, commissions and appointments seemingly overlapped. On June 2d, Alexander was appointed 1st Lieutenant in Company A of the 18th Infantry, but three days later Cornelius signed an oath of office as 1st Lieutenant of the same Company.

Eventually, with the 18th being oversubscribed, eighty-four men who had enlisted for that regiment were transferred and would form the bulk of Company A of the 21st Infantry.

Alexander remained with the 18th Infantry until resigning the following April, while his younger brother, Cornelius, was appointed Major of the 21st Infantry. Cornelius was described as being a twenty-five- year-old attorney with blue eyes, dark hair and a dark complexion. At 6' 1", he was more than four inches taller than the average of those who served in the regiment.

Cornelius signed the oath of office on August 6, 1862, but this was a regiment still being organized and lobbying for staff positions was heavy.

On August 17th, from Camp Franklin in Dubuque, Cornelius wrote to Governor Kirkwood. I understand there are several applications from here for Lt. Col. of the 21st Regt. I have had considerable experience in military affairs, he said, and I certainly think that if a civilian is to be taken for one of the field offices of the regt I am entitled to the preference. I can have the unanimous support of the officers of the regt so far. Persuasive on his behalf was George Pierce, a Captain in the U. S. Infantry who was serving as the Mustering & Disbursing Office in Dubuque.

On August 26th, he wrote to the Governor and said Cornelius has displayed signal ability and faithfulness in the discharge of his duties as commander of the Post. It seems to me that no more popular appointment could be made with the soldiers or people. The next day, Governor Kirkwood announced his selections of Sam Merrill as Colonel, Cornelius Dunlap as Lieutenant Colonel and Salue Van Anda as Major. They were mustered in as a regiment on September 9th and left for war on the 16th.

In January they were stationed in Houston, Missouri, when word was received that a Confederate force was advancing on Springfield. Reinforcements were needed. Twenty-five volunteers and an officer were requested from each company and placed under Cornelius command. With a similar number from another regiment, the combined force was led by Colonel Merrill.

On January 11, 1863, still on their way to Springfield, they met the enemy in a one-day battle at Hartville. Led by General Marmaduke, the Confederates occupied high ground east of town and repeatedly charged the Union line to the west.

In the afternoon, with ammunition running low, Colonel Merrill ordered a withdrawal to the north, but the order never reached Dunlap and he soon realized that he and his comrades from the 21st Infantry were the only ones left to face the still-charging enemy. The battle ended late in the day and Dunlap and his men followed Merrill to the north.

Jim Bethard, a private in Company B, participated in the battle and told his wife, Lieutenant Colonel Dunlap has always been a favorite with the 21st and has stood higher in the estimation of his men since the battle of Hartsville [sic] than ever for he behaved like a brave man he was in the thickest of the fight all the time he rode along the lines in front of his men cheering them and giving orders all the time until his horse was shot from under him and then he took on foot.

Dunlap was wounded twice during the battle and one of his fingers was amputated.

Later that year, the regiment played a leading role during General Grants successful Vicksburg Campaign. After walking south from Millikens Bend, along roads and across bayous and through swamps west of the river, they reached Disharoons Plantation.

From there, on April 30, 1863, the army crossed to Bruinsburg on the east bank. The 21st Infantry was designated as the point regiment for the entire army and started a slow walk inland along a dirt road with skirmishers probing the woods on each side. When darkness came, the skirmishers were pulled in and an advance party of four men, with Dunlap in command and a former slave guiding them, moved slowly forward. Gunfire was exchanged with Confederate pickets about midnight and, the next day, they fought the Battle of Port Gibson. Three members of the regiment were fatally wounded and at least thirteen were wounded less severely. Among them, again, was Cornelius Dunlap who was shot in the foot.

Having been at the front of the army and drawn first fire at Port Gibson, they were rotated to the rear as the army continued inland, all the way to Jackson before reversing direction and heading towards Vicksburg. Confederate forces under General Pemberton moved out of Vicksburg and the two sides met at Champions Hill on May 16, 1863. Casualties in both armies were heavy, but Union General McClernand held the 21st and other regiments in its brigade out of action.

They were then moved back to the front and, with the 23rd Iowa, routed entrenched Confederates at the Big Black River. With the way to Vicksburg now open, Grants army moved quickly to encircle the city while the Iowa regiments engaged at the Big Black were allowed to stay behind, bury their dead and care for the wounded.

On the 18th, Cornelius wrote a report of the battle and noted that Colonel Merrill had commanded the regiment in the first part of the charge before being severely wounded.

They werent present for General Grants first assault at Vicksburg but, with Dunlap now in field command, were present for an assault on May 22nd. After an early morning bombardment, artillery fell silent at 10:00 a.m. and all along the Union line soldiers charged the enemy with the 21st Iowa facing the railroad redoubt.

For a while it seemed the Confederate defenses had been broken, but by the end of the day the assault proved unsuccessful. Iowas 21st Infantry had twenty-three killed during the assault, another twelve had fatal wounds and at least forty-eight had less serious wounds although many led to amputations and discharges from the military.

Due to his foot injury, Dunlap could have refrained from participating but did not. Unable to keep up with the regiment, but having an "impetuous nature" that "would not allow him to remain in camp . . . he followed, where his physical infirmity would not permit him to lead, and after struggling up the height to the position the regiment had gained but could not hope to hold, he yielded up his life beneath the flag he loved and honored." Waving his sword and encouraging his men, Dunlap had reached the top of a ridge after the initial assault and was standing on a small knoll when shot through the head. He was killed instantly.

Cornelius was a bachelor, but his widowed mother, with no income and only a small house, a cow and a little furniture, had been partially dependent on him for almost five years.

On September 8, 1863, still living in St. Clair County, she applied for a mothers pension with Alexander and James serving as witnesses. Her request was approved at $30.00 per month, retroactive to Cornelius death, but it would be another year before payments began. 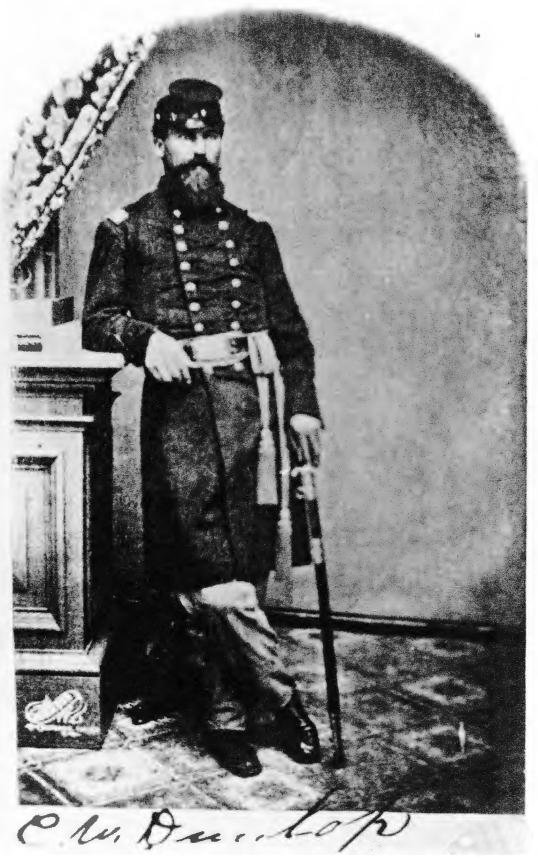