Delilah died of pneumonia on 21 Jan 1910 at home. She was survived by her husband and six children. She is buried in the Martin's Chapel Cemetery in Pacific Junction, IA.

John was living near Missouri Valley, IA before his death on 30 Jun 1918 in a Council Bluffs, IA hospital. He was also buried at Martin's Chapel Cemetery in Pacific Junction, IA.

This picture was originally in the possession of Amos E. Reed and wife Grace A. Fosdick.  Amos was the son of John Reed and Delilah Schooler.  Grace was the daughter of Aaron Jay Fosdick and Adeline Buffington.  Any direct connection to Modale in Harrison County, IA is not known.  However, there was a lot of family living in Harrison County.

Amos's father John Reed was living around Missouri Valley, IA prior to his death in 1918.

Regarding this photograph:
Two numbers are stamped on the back: in red is 10-241 and possibly a 6 in blue (the handwriting is over that number) and in blue across from it is 235.
The handwritten inscription says: A.E. Reed RR1 Modale IA, eyes dark blue, order # 5T793R4 (the next 2 numbers are scratched off by a tape or glue mark) NSec27.
The final line says T.B. 20 dollars.
Submitted by Deb Hascall Hascalldkh@cox.net

Do you know the lady, in this photo? If so please contact Deb Hascall

Written on the back of the picture: 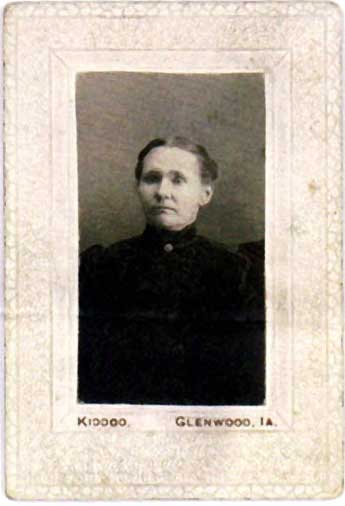