In the fall of 1850 the family joined a wagon train headed for the California gold rush, because of a storm that over turned their wagon and injured Daniel the family stayed in Mills county, Iowa. He located on land then in the possession of the Mormons, and from whom he purchased it in Aug. 1851. It was then known as Cutler's camp.

At the time Mr. Lewis came to Mills county the country about him and Malvern, except the `Mormon settlement` was unoccupied by white men. He was identified with the first formation and settlement of the county; he was first married to Nancy Logan, in Kentucky,

in 1820, after her death he moved with his young daughter to Indiana; his second marriage was to Harriet Holstein, October 24, 1830 in Marion Co., Indiana; he was the father of 13 children; his farm lies in section 7,and contains three hundred acres. Before providing for his children his acres numbered twelve hundred. The land where the East Liberty Church and Cemetery are located where donated by Daniel Lewis.

Daniel and Harriet were among the founding members of the East Liberty Church. The cemetery contains a large number of their family members, including George W. and his wife Mariah Wiatt Lewis. 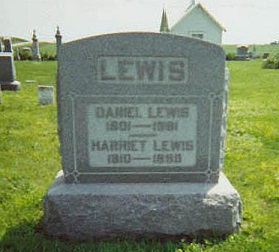