William and Mary along with their 2 year old daughter, Catherine Rebecca, arrived in Mills County (then Pottawattomie) as Mormon Immigrants from Moulton Chapel, Linconshire, England in 1846. They helped settle the Rushville Community and then with several others pioneered the community of Coonville in Mills County, Iowa and then went to Oak Township, Mills, Iowa where William farmed till moving from the area in 1883 with his family to Garden City, Finney, Kansas.

William Britain married Mary Rand Bains August 14, 1843 at Moulton Chapel, Lincolnshire, England. Before coming to America William supported his wife and daughter farming or as a farm laborer in the Lincolnshire area. Willaim and Mary were the parents of 12 children, 11 born in Mills county and of the 12, only 5 daughters and 1 son reached adulthood.

Mary Rand Bains was born April 1, 1821 at Moulton Chapel, Lincolnshire, England. She was Christened into the LDS faith alongside her future husband, March 23, 1843 in Lincolnshire and later joined the RLDS Church before her husband and was baptized Sept 23, 1861 in Glenwood, Mills, Iowa. Mary Rand Britains death occurred June 13, 1906 in Rice County, Kansas (her obit says Garden City, Finney co., Ks). She is buried next to her husband, William, at Valley View Cemetery in Garden City, Finney, Kansas. They were the parents of 12 children, 11 born in Mills county and of the 12, only 5 daughters and 1 son reached adulthood 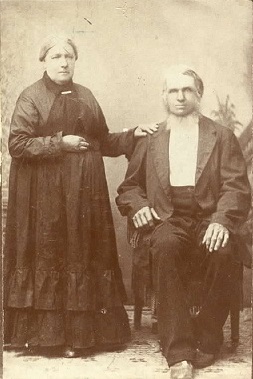