At the age of sixteen years she made a profession of religion and united with the Methodist church.

On February 24,1853, she was married to Matthew M. McGee. In the fall of the same year she and her husband emigrated to Iowa, stopping for a time in Monroe county, and settled in Madison County in 1854, which has been their home ever since.

In the winter of 1855 she transferred her membership to the Christian church of which she remained a member till her death, living and dying in full faith in the Christian religion, giving evidence of its power to sustain her during a long and painful illness. And as she entered the Jordan of death, the waves dashed their spray in her face, she waved the palm of eternal victory, and crossed over with a smile upon her countenance.

Mrs. McGee was highly esteemed by her friends and neighbors, as was manifested by the large numbers who attended her funeral, and the large procession that followed her to the place of interment by the side of friends in the cemetery at Winterset.

She has left a beautiful home, which she and her husband labored so long to build up and beautify. It is now like the summer rose, having lost its fragrance and charm. She leaves a husband, and four children, John M., Iver Lee, Mrs. C. F. Perkins and Mrs. F. M. Peed, and their families to mourn her loss.

The funeral services were conducted at the family residence to a large and sympathizing audience of friends and neighbors.

She has gone; may her many christian virtues echo and reverberate through her former works of life. 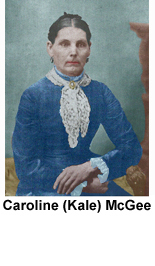