Mrs. Retta Enright, life-long resident of Madison County, died Saturday April 8, 1950, at the home of her daughter, Mrs. Robert Welty in Winterset. She suffered a stroke Wednesday evening of last week at her home in Douglas Township, from which she never rallied.

Mrs. Enright was 65 years of age. She was born December 8, 1884, a daughter of Frances and
Rebecca McGee Peed. She was married August 9, 1923 to Thomas Enright of Crawford Township. Most of their married life was spent on a farm north of Patterson. Mr. Enright died in 1944.

She was a member of the Winterset Methodist Church and affiliated with Crown Rebekah Lodge.

She leaves a daughter, Mrs. Mary Welty of Winterset; a son Robert Enright, at home; and two
brothers, Ira Peed of Winterset and Roy Peed of Earlham. 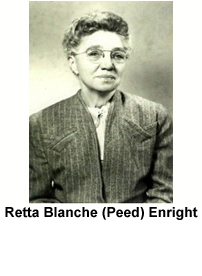