Pauline Erickson, 99, of Winterset went to be with her Lord and Savior on June 6, 2018, at the Winterset Care Center North.

Funeral services will be held at 11:00 a.m., Tuesday, June 12, at the Trinity Lutheran Church, near Van Meter, with visitation one hour prior to the funeral service beginning at 10:00 a.m., with family present to receive friends.

Burial will be in the Trinity Church Cemetery.
Memorials may be directed to the Trinity Lutheran Church.

Pauline Gertrude Rehbein, daughter of Henry and Laura (Eichner) Rehbein, was born December 29, 1918, in Waukee. She was baptized March 23, 1919, at Trinity Lutheran Church where she was later confirmed. She attended country schools up to the eighth grade. Pauline then helped her father farm and care for her younger siblings. During WW II, from 1942 to 1945, Pauline worked in San Diego repairing airplanes. Like many women during this time, she took the place of factory workers who were off at war and she was very proud to be a Rosie the Riveter.

Pauline was united in marriage with Edwin Erickson on August 21, 1948, at the Trinity Lutheran Church in Des Moines. After marriage, Pauline was a homemaker and a dedicated wife. She was a member of the Lutheran Ladies Societies and enjoyed making crafts in her free time. 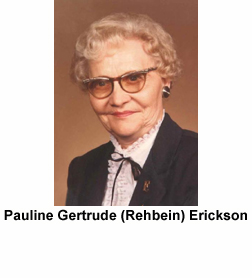