WINTERSET, IA.Services for Leona Porter, 85, of rural Adel, who died of cancer Sunday at Iowa Lutheran Hospital in Des Moines, will be at 11 a.m. Wednesday at Collins Funeral Home. Burial will be in Winterset Cemetery.

Mrs. Porter was born in Otley and lived in Dallas County 38 years.

Services for Leona M. Porter, 85, rural Adel, who died May 5 at Iowa Lutheran Hospital in Des Moines, were held Wednesday, May 8 at the Collins Funeral Home with the Rev. James Robertson officiating. Burial was at the Winterset Cemetery.

Born at Otley Jan. 5, 1900, she was the daughter of William J. and Marie Mae DeReus Honnold. She married Lee A. Porter on March 30, 1920 at Newton. She was a housewife and had spent the last 38 years in Dallas County.

She was preceded in death by her parents, a great grandson, two brothers and a sister. 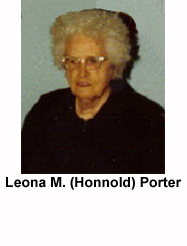