A visitation will be held 3:00 to 5:00 p.m., Wednesday, January 13, at Caldwell Parrish Funeral Home, Winterset Chapel. Funeral Services will be private. Memorials may be directed to the Winterset High School FFA and/or the Husky Booster Club.

Gean Harlan Mapes was born July 16, 1943 at home in Winterset, Iowa; the son of Ralph and Gladys (Bruett) Mapes. He graduated from Winterset High School in 1961 and was united in marriage to his high school sweetheart, Brenda Jo Henrichs on October 27, 1962.

He was a lifetime resident of Winterset and has always farmed. In his younger years, he was in FFA, 4H, was John Deere Young Farmer of the Year, and was an Iowa All State football player. He was a member of the Jaycees, Co-op board of Winterset and Census Mediator for Douglas Township. He also worked at the hog barn for the fairgrounds, was a member of the Rattlesnake Enduro Club, and District 22 Hare Scramble Enduro Circuit.

He was preceded in death by his parents, Ralph and Gladys (Bruett) Mapes; his wife, Brenda Mapes; and a sister, Donna Raber. 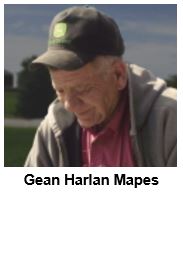