For the first time in the history of Winterset, fireworks were banned from the town square during the celebration of Independence Day in 1911. One poor soul, a stranger who hadn't heard of the ban, was arrested and forced to pay a fine to the city for discharging fireworks but that was the only incident. Also noteworthy was the temperature on that day, an official 107º in the shade. There was much talk in town about the survival of crops due to the prevailing drought.

Three activities dominated the celebration that day. There was a baseball tournament between teams from Lorimor, Peru, and Winterset. Winterset and Lorimor met in the finals and Winterset jumped to an early lead. Unfortunately, their pitching fell apart later on and Lorimor took the title, 9 to 4.

The second activity was a parade where various groups and individuals decorated floats, carriages, wagons, cars, buses, and horses and paraded around the town square. Prizes were given for the best looking displays among various categories. Among the participants was the new Winterset fire wagon drawn by a set of matched grays owned by Ralph C. Bancroft. Some of the individuals receiving parade honors were Dr. Rolla A. Schwaner, Lillian Maxwell, Zoe Skinner, Mary Eastman, Vera Van Hosen, and Joseph E. Hamilton.

Other activities that filled the day included various amusement contests and vaudeville attractions, culminating in the hot air balloon flight staged about 4:30 p.m. The balloon was inflated on the "Benge lots" south of the square. The pilot, C. B. Johnson of Odessa, Missouri, was to jump from the balloon and descend by parachute. After launch, strong winds from the south quickly blew the balloon out of view and Johnson's parachute lines purportedly "got tangled" and no jump was made. The balloon landed without incident near the old Baptist church northeast of town.

Johnson was luckier than a balloonist who visited Winterset in the 1870s. After a very large build-up of the event in the Madisonian for several weeks beforehand, the decrepit looking balloon never got off the ground and angry citizens, having paid 10¢ apiece to watch the spectacle, surged forward and tore the balloon to shreds. 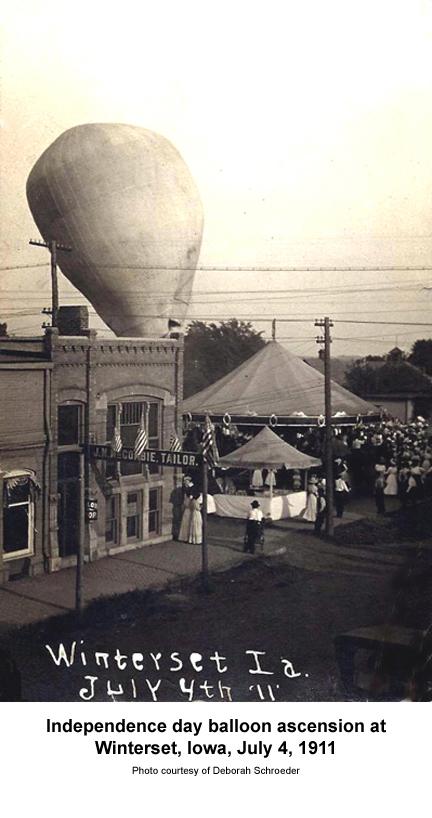