J. M. Killam, senior member of the Hall & Killam Lumber Company, of Truro, Iowa, is a successful and highly esteemed business man and a public-spirited citizen. He was born in Clayton county, Iowa, on the 30th of June, 1847, a son of Timothy and Rebecca Ingrain (Billings) Killam, who were married in Hartford, Connecticut. The birth of the father occurred in that state and his wife was also of Yankee stock. Following their marriage they settled in Clayton county, Iowa, and were among the very earliest residents of that section of the state, as they were the third family to locate between Dubuque and McGregor, then known as Fort McGregor. The father preempted land and the family continued to live there for about twenty-three years. In 1867, however, a removal was made to Madison county and they settled on Coon Divide, south of Van Meter. Later that place was sold and they removed to Adair county, where the father passed away about 1896. In their family were six children, four sons and two daughters, being in order of birth as follows: Maria, the wife of Goodliff Brooker, of Earlham; Elizabeth, the wife of George Brooker, of Van Meter, Iowa; J. M., of this review; C. D., a resident of Morningside, Sioux City; T. I., of St. Charles; and George M., of Denver, Colorado.

J. M. Killam attended district schools in Clayton county, Iowa, and the Upper Iowa University at Fayette. During the Civil war he served for seven months in the Union army in the commissary department, and after leaving the Federal service located in Delaware county, Iowa, but the next year came to this county and entered the mercantile field at Patterson. A year later he removed his store to St. Charles, where he was in business for seven years. At the end of that time he purchased a farm and in partnership with his brother, C. D. Killam, also engaged in the lumber business in St. Charles. Fifteen years later he sold out his interests and removed to New Virginia, where for two and a half years he conducted a lumber business, selling out at the end of that time to the Lee Lumber Company. His next removal was to Truro, where he opened a lumber yard, conducting the business alone until March, 1912, and then took his son-in-law, Ray Hall, into partnership under the firm name of the Hall & Killam Lumber Company. Mr. Hall was made manager of the concern, Mr. Killam retiring from active business. Since that time he has been the silent member of the well known firm, which has a gratifying patronage in its line. The business community of Truro holds Mr. Killam in high respect, as he has many times demonstrated his ability to cope successfully with vexing financial and business problems and as in all of his dealings he has steadfastly adhered to honorable principles.

Mr. Killam was married on Christmas Day, 1867, to Miss Elocia Josephine Finney, who was born on the 2ist of May, 1850, of the marriage of Nelson and Matilda (Bowersmith) Finney. Her father was born in Franklin county, New York, on the 20th of March, 1821, of English descent, and her mother was a native of Licking county, Ohio, born on the 6th of April, 1823. On the 16th of September, 1842, they were united in marriage by Rev. Daniel Long, in Union county, Ohio. About 1855 they left that state and made their way to Washington county, Iowa, whence after a year they removed to Adair county, west of Winterset. The father purchased one hundred and twenty acres of land on the line between Madison and Adair counties and planted the famous Walnut Grove there. This farm was considered the family homestead but in 1860 a removal was made to Adams county, the family residing in Nevenville while Mr. Finney went to Pike's Peak and Salt Lake City in search for gold. Upon his return in 1868 he purchased a farm in Penn township, Madison county, south of Dexter, and resided there until 1873. In that year he took up his residence in Winterset, where for four or five years he conducted a store, and upon selling that business he bought land in Lincoln township, which he operated until 1896, when he disposed of it and removed to Winterset, where he continued to reside until his demise, which occurred on the 3d of February, 1900. He was a pioneer and possessed those qualities of perseverance, independence and dauntless courage that characterize those who first take up their abode in a new country. He accumulated considerable property but did not confine his attention to material affairs, as he realized the value of the moral and civic development of a community. He was one of the consistent and active members of the Christian church for many years and did much to further its work. All of his children were well educated and well trained so that they became useful and honored citizens of their respective communities. Ruhama, who was born on the 6th August, 1843, died on the 19th of January, 1900. Diadamah, who was born on the 10th of September, 1845, married Wesley Prather on the 24th of December, 1865, and they are now residents of Texas. Their son Elmer is a hypnotist with a large hospital in Paris, France, and is quite wealthy. Much of his work is that of hypnotizing patients who have to undergo operations. Alonzo and Lorenzo, twins, were born on the 6th of March, 1847. Alonzo married Alice Garrettson and they reside in Winterset, and Lorenzo, who married Sarah Gordon, also lives in Winterset. Christiana, whose birth occurred on the 29th of October, 1848, became the wife of John Epperson. Elocia Josephine, the wife of our subject, is the next in order of birth. Sarah, whose natal day was the 6th of September, 1852, married J. M. Hall and resides in Winterset. John W., born September 30, 1855, married Miss Laura Lunbeck. Melissa, who was born on the 12th of February, 1857, died in infancy. Electa, whose birth occurred on the 10th of August, 1859, married John McDowell and they reside in Des Moines. Benjamin, the youngest of the family, was born on the 27th of December, 1861, and is a resident of Tulsa, Oklahoma.

Mr. Killam is a republican and is also unflinching and unwavering in his support of the temperance cause, refusing absolutely to vote for any man that does not stand -for temperance. For four years he was mayor of Truro and during that time he stood firmly for prohibition, no matter how strong the opposition. For forty-four years he and his wife have been members of the Methodist Episcopal church and for thirty years he has taught the Bible class in Sunday school. For twenty-three years his wife has been teacher of the infant class and the extent of their influence cannot be estimated. There is no office in the church that he has not held and for forty years he has been a member of the official board, while for twenty-five years he has been recording steward. His sincerity and loyalty to his convictions has commanded the respect that is always given to honesty and courage, and there is no more esteemed citizen of Truro than J. M. Killam. 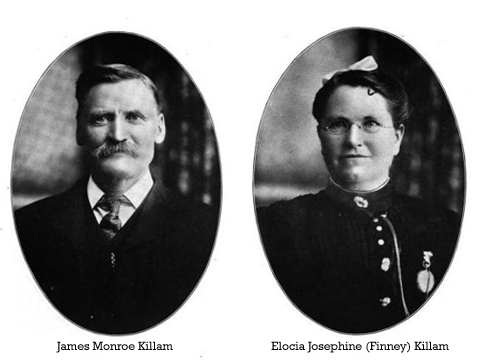