Biography reproduced from page 388 of the History of Kossuth and Humboldt Counties, Iowa published in 1884:

A. A. Brunson was born May 29, 1840, in Grand Isle Co., Vt., and there grew to manhood. In August, 1862, he enlisted in company H, 106th New York Volunteer Infantry, and was rendezvoused at Camp Wheeler, Ogdensburg, from there sent to West Virginia, where he spent the winter of 1862-63. The following May he participated in the battle of Martinsburg, battle of the Wilderness, South Anna River, Spottsylvania Court House and Cold Harbor. He was then promoted to first lieutenant, and took command of company I. At the battle of Winchester he was wounded in the right hip, and in 1865 discharged at Indianapolis. He came west in April, 1865, settling in Clayton Co., Iowa, and engaging in mercantile business. In 1870 he came to Kossuth county and took a homestead. In 1873 he was elected superintendent of schools, and in 1875 re-elected. He was afterwards appointed mail agent on the Chicago, Milwaukee & St. Paul railroad for two years. In 1866 he married Dora Benjamin, of Clayton Co., Iowa. They have two sonsWillis and Glenford. He is a Master Mason of Prudence Lodge, No. 205, of Algona; also belongs to the Grand Army of the Republic.
-------------------------------------

Biography reproduced from page 184 of Volume II of the History of Kossuth County written by Benjamin F. Reed and published in 1913:

On the roster of county officials in Kossuth county appears the name of G. A. Brunson, who was elected sheriff in 1910 and who has since ably discharged the duties devolving upon him in that connection. His birth occurred in Lotts Creek township, this county, on the 3d of December, 1870, his parents being A. A. and Eudora (Benjamin) Brunson. The father was born on the 29th of May, 1840, in Grand Isle county, Vermont, and there grew to manhood. In August, 1862, he enlisted for service in the Union army as a member of Company H, One Hundred and Sixth New York Volunteer Infantry, which rendezvoused at Camp Wheeler, Ogdensburg, and from there was sent to West Virginia, where Mr. Brunson spent the winter of 1862-63. The following May he participated in the engagement at Martinsburg, the battle of the Wilderness and those at South Anna River, Spottsylvania Courthouse and Cold Harbor. He was then promoted to the rank of first lieutenant and took command of Company I. At the battle of Winchester he was wounded in the right hip. In 1865 he was honorably discharged at Indianapolis, thus closing a creditable military career. In the month of April, 1865, he came west, settling in Clayton county, Iowa, where he embarked in the mercantile business. In 1870 he came to Kossuth county and took up a homestead. In 1873 he was elected superintendent of schools, proving such an able incumbent of the office that he was reelected two years later. Subsequently he was appointed mail agent on the Chicago, Milwaukee & St. Paul Railroad for two years. When he passed away on the 3d of August, 1900, the community mourned the loss of one of its most respected and substantial citizens. He belonged to the Grand Army of the Republic and was a Master Mason, connected with Prudence Lodge, No. 205, of Algona. It was in 1866 that he wedded Miss Eudora Benjamin, of Clayton county, Iowa, who survives him and makes her home in Algona, this state. Unto them were born two sons, namely: Willis J., who married Miss Leota Lamberson, a native of Michigan, by whom he has one child, Zada; and Glenford A., of this review.

The latter attended the public schools of Algona in the acquirement of an education. After attaining his majority he served as deputy clerk of the court under his father for a year and a half. Having acquired great skill and ability as a musician, he was connected for a period of two or three years with a theatrical company and also with a circus, spending the winter months with the former and the summer seasons with the latter. Subsequently he was identified with the management of the State Insane Hospital at Independence, Iowa, for eight years. On the expiration of that period he removed to Livermore, Iowa, where he purchased a drug store and conducted the same successfully for three and a half years. He then became a traveling representative for a wholesale cigar house and remained in that line of work until elected sheriff of Kossuth county in 1910. In that capacity he has served to the present time and has won an enviable reputation as a fearless and able official.

On the 6th of July, 1894, Mr. Brunson was united in marriage to Miss Mame McGuire, who was born in Jesup, Iowa, on the 26th of October, 1872, her parents being James and Ellen (Fergunson) McGuire. Unto our subject and his wife have been born three children, namely: Wilda, whose birth occurred on the 4th of April, 1897, and who died when eight months old; Asahel Allen, whose natal day was April 29, 1906; and John Glenford, who was born on the 24th of May, 1909.

Mr. Brunson gives his political allegiance to the republican party, believing firmly in its principles. Fraternally he is identified with the Benevolent Protective Order of Elks at Estherville, Iowa, and the Masons, Yeomen and Modern Woodmen of Algona. Both he and his wife attend the services of the Congregational church. Mr. Brunson is a member of the Algona Harp Orchestra and is widely recognized as one of the best musicians in northern Iowa. His strong and salient characteristics are such as endear him to all who come within the close circle of his friendship, while wherever he is known he is respected and honored. 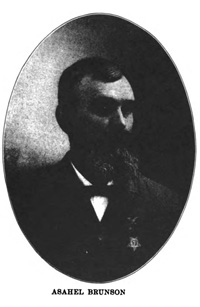