Biography reproduced from page 451 of the History of Kossuth and Humboldt Counties, Iowa published in 1884:

Philip Dorweiler, oldest son of J. J. and Margaret (Seiler) Dorweiler, was born Nov. 2, 1831, in Lommersum, near Cologne in Rhenish Prussia. In April, 1852, he came with his parents to America and settled in Clayton Co., Iowa. His father is dead, but his mother, at the advanced age of eighty years, is living with her youngest son, Henry, near Philips home. He was married Feb. 2, 1861, to Anna Kann, a daughter of Geoffrey and Catharine (Jones) Kann, of Clayton Co., Iowa. His wife died Aug. 25, 1882, leaving seven childrenJoseph, Alexander, Margaret, Catharine, Charles, Mary and Josephine. Cilly Kann, his niece, also makes her home at Mr. Dorweilers. Mrs. Dorweiler was buried in the Dorweiler cemetery, near her old home. In 1866, Mr. Dorweiler in company with his father and brothers Henry and Paul, came to Kossuth county, and settled in township 94, range 30, being the first settlers in the township. He located on the north half of section 6, and also owns 560 acres of other land near by. He has eight acres of as fine grove as can be found in the county, ash, cottonwood and maple trees, also a fine bearing orchard of one acre. Two hundred acres of his land is under cultivation, where he raises an abundance of grain, and keeps fine stock, having twenty cows, eight horses, and nice wells of water twenty feet deep. His buildings are all neat and substantial, sheltered from all directions. Mr. Dorweiler is one of the most prominent men in this township is a well educated man, having received his education in Rhenish Prussia, and since coming to this country, has continued to to study the English language, so that he is quite proficient. In 1874 he was elected to justice of the peace, served four years. In 1875 was elected supervisor, and served six years. He is now school director of district No. 5. He and his family are Catholics. In politics, Mr. Dorweiler is an independent, and is one of the directors of the Bank of Algona.
------------------------------------------

Biography reproduced from page 328 of Volume II of the History of Kossuth County written by Benjamin F. Reed and published in 1913:

Philip Dorweiler, who is living retired in West Bend, where he owns a beautiful residence, was for many years actively identified with the agricultural development of Kossuth county. He was very successful in his undertakings and acquired extensive property interests, at one time holding the title to practically a section of land in Garfield township, all of which was under cultivation.

He was born at Lommersum, in the vicinity of the city of Cologne, Prussia, on the 2d of November, 1831, and is the oldest son of J. J. and Margaret (Seiler) Dorweiler. The family emigrated to the United States in 1852, and located in Clayton county, where they resided for fourteen years. At the end of that time, in 1866, they came to Kossuth county, and here the father together with two of his sons, Philip and Paul, filed on homesteads in what is now known as Garfield township. The father was then too old to undertake the cultivation of his tract, which was turned over to his son, Henry, but he and the mother resided on the farm until their deaths.

The first twenty-one years in the life of Philip Dorweiler were passed in the land of his birth, where he received his education. He emigrated to the United States with his parents and was for many years associated with his father in the cultivation of the old homestead in Clayton county. He also accompanied them when they removed to Kossuth county, where he has now resided for forty-six years, being one of the oldest pioneers in the county. Upon his arrival here he located on the north half of section 6, Garfield township, and immediately set about improving his land and placing it under cultivation. As his circumstances warranted he subsequently extended his holdings until at one time he owned five hundred and sixty acres of valuable land. He made extensive improvements on the place, including the fencing of the fields and the erection of substantial barns and a comfortable residence. Mr. Dorweiler is both practical and progressive and his farm was equipped with all modern machinery and appliances deemed essential to the agriculturist. He diligently engaged in the further cultivation and improvement of his place until very recently, but he has now retired from active work and is spending his latter years in well earned rest. He owns one of the best residences in West Bend and is numbered among the countys most substantial citizens, which fact is entirely attributable to his long years of earnest endeavor and unceasing toil.

In Clayton county on the 2d of February, 1861, Mr. Dorweiler was united in marriage to Miss Anna Kann, a daughter of George and Catherine (Jones) Kann, well known farming people of that section. To Mr. and Mrs. Dorweiler have been born seven children, Joseph, Alexander, Margaret, Catherine, Charles, Mary and Josephine. The mother passed away on the 25th of August, 1882, and was laid to rest in the Dorweiler cemetery in the vicinity of her old home. Mr. Dorweiler was again married on January 11, 1893, when he contracted a union with Mrs. Eckart.

The family are communicants of the Roman Catholic church and in his political views Mr. Dorweiler has always been independent giving his support to such men or measures as he deemed best adapted to serve the highest interests of the people. The hope that led him to leave his native land and seek a home in America has been more than realized, as he found the opportunities he sought and by the intelligent concentration of his energies utilized them to advantage, thus attaining a position that won him the respect and esteem of the community, where he is held in high regard by reason of his many substantial qualities. 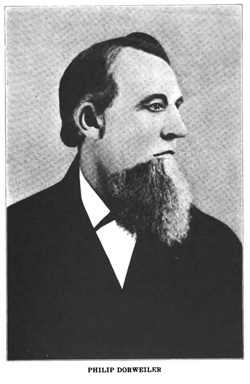