Biography reproduced from page 482 of Volume II of the History of Kossuth County written by Benjamin F. Reed and published in 1913:

Dr. W. T. Peters, who is one of the prominent members of the medical profession in Kossuth county and who has been actively engaged in general practice for the past eighteen years at Burt, Iowa, is a native son of this state, born in Clayton county, February 7, 1870. His father, John Peters, was born in Pennsylvania and grew to manhood in that state. He came to Iowa when he was still very young and is numbered among the pioneer settlers of Clayton county. He purchased land there and carried on general farming for a number of years. He enlisted in 1861 in Company K, Second Iowa Volunteer Cavalry, and served throughout the Civil war. At the close of hostilities he was honorably discharged and returned to Iowa, where he resumed agricultural pursuits. He was successful as a farmer and spent the last years of his life upon his Clayton county property, there passing away in 1885. He was married in Pennsylvania to Miss Mary Ann Stout, who survived him some years, her death occurring in 1900.

Dr. Peters received his early education in the public schools of Clayton county and later attended the Iowa State University. When he was a young man he came with his elder brother to Kossuth county, where he worked for a railroad construction company and was also a teamster for a number of years. He later studied medicine for four years with Dr. Cutler of Bancroft, Iowa, and supplemented this by a years study in the medical department of the State University. Later he entered the Rush Medical College, Chicago, graduating with the class of 1894 and receiving his degree in that year. He located for practice in Burt, Kossuth county, August 5, 1894, and here has gained success and prosperity as a general physician. In 1897 he took a post-graduate course at the Chicago Polyclinic Institute, and then returned to Burt, being numbered among the representative and successful practitioners of this county. His practice is increasing every day and is bringing him an ample income. Dr. Peters is a physician of the modern school, scientific, conscientious and thoroughly conversant with the underlying principles of successful practice. He has specialized in surgery and has that dexterity and precision of touch without which the most expert technical knowledge would avail him nothing. He has performed many important operations and has an enviable record in this branch of the profession.

Dr. Peters was married in Burt, Iowa, June 30, 1897, to Miss Minnie L. Shadle, a daughter of J. D. Shadle, one of the pioneer settlers of Kossuth county, who now makes his home with his son-in-law. Mrs. Peters died in 1907, leaving two children, Russell L. and Maleta. In February, 1909, the Doctor was again married, his second union being with Mrs. Gertrude E. Sanderson, a native of Geneseo, Henry county, Illinois, who came to Iowa in her childhood and was here reared and educated. She has one daughter by her former marriage, Aileen Sanderson, now a student in the Burt high school.

Dr. Peters has not allowed his professional duties to absorb his entire attention, believing that every man has a duty as a citizen. He is one of the public-spirited men of Burt and has been prominently identified with the progress of the city. He has built a comfortable and attractive home, equipped with all modern conveniences, and is also the owner of a fine office building. He has identified himself with the agricultural interests in the county and has brought a farm of three hundred and twenty acres in Ramsey township to a well improved condition. He has placed this land in charge of others, giving it only general supervision, but it now forms one of the model properties of the section. It is improved, well fenced and thoroughly tiled, and is a valuable addition to the resources of the county. Dr. Peters is interested in educational affairs and is president of the Burt school board, which office he has occupied for twelve years. He advocated for a number of years the building of a new schoolhouse and through his hard work and public-spirited enterprise this structure was finally completed. It is a well equipped and large building, thoroughly modern in all of its appointments. The Doctor is a stockholder in the Burt Creamery Association and the Farmers Elevator Company. He was the promoter of the Burt Telephone Company and has been president of that organization since its incorporation. He served on the town council several years. Until recently he was a republican but is now an active supporter of the national progressive party. His fraternal relations include his membership in the Masonic order, belonging to Kossuth Lodge at Burt and in the Des Moines Consistory. He also holds membership in the Za-Ga-Zig Temple, and he and his wife belong to the Order of the Eastern Star. He is thoroughly conversant with all modern development in the medical science and adheres to a high ethical standard which make him not only an able physician but an honorable and upright man. 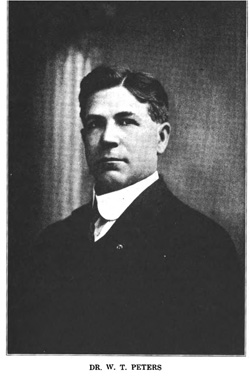