Jeffery was born May 24, 1968, to Paul Edward and Esther Elizabeth (RUSSELL) SNELLING in Laguna Beach, California.

Jeffery worked as a shift foreman at Nelson Company. He loved listening to his son Paul talk about different TV shows and video games. While his health allowed, Jeffery enjoyed his walks with his daughter Elizabeth and dog Sparkles. He was also in the process of teaching his daughter Elizabeth how to drive. What filled Jeffrey's (sic) heart the most was being a father to his children. He also had a grand kitties, Orion and Taffy.

He was preceded in death by his father, Paul; brother, Bryan HOOTMAN; and grandparents, Harold and Florence SNELLING. 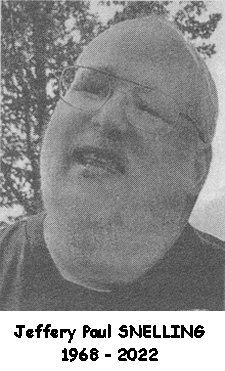