In-lieu of flowers, memorials may be made to the family and mailed to Terri CHANNEL, P.O. Box 262, Libertyville, IA 52567.

Roger was born in Fairfield, Iowa on October 7, 1943, to Herschel and Mildred SMITH CHANNEL. He married Terri MADDIX at the Methodist Church in Libertyville, Iowa, on June 4, 1967. They were the parents of two children, Ryan Lee and Regan Linn.

Roger grew up south of Libertyville, spending his entire life in the Libertyville area. He graduated from 8th grade in Libertyville and from Fairfield High School with the class of 1962. After high school in October of 1962, he enlisted in the Army. Roger was stationed in Verona, Italy, from 1963 to 1965, he traveled throughout parts of Europe on the Pistol Team from 1963 to 1964.

After returning from service, he attended Parsons College where he worked in the business office for a time. Roger worked for Louden Machinery Company, John Morrell & Company, and remained at ACCO Chain and Lifting until he retired in 2001, then worked as custodian at Pence Elementary School until retiring in 2009.

Roger was a member of Faith United Methodist Church and served as trustee. He also was a member of American Quarter Horse Association since 1969, and member of National Rifle Association. Roger's interest in horses started at an early age. He received his first horse at the age of 10 and continued owning and raising Registered Quarter Horses with his wife on the farm south of Libertyville.

Some of Roger's other interests were boating, working with horses, landscaping with his wife, watching and feeding the birds, but most of all was traveling, especially to see grandchildren.

Roger will be missed by his wife, Terri, of 55 years; children, Ryan (Amanda) CHANNEL of Glenelg, MD, and Regan (Kellee) of Kilbourn, IA; three grandchildren, Owen, Reese and Serenity; sister, Mary Ann (Larry) EKLUND of Libertyville; and many nieces and nephews.

He was preceded in death by his parents, Herschel and Mildred CHANNEL; nephew, Mark EKLUND. 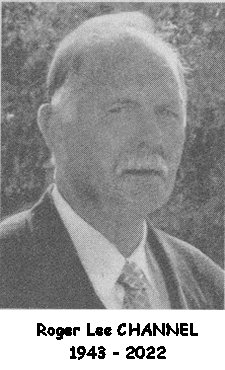