There will be a celebration of life service at 1 p.m. Sunday, November 20, 2022, at Behner Funeral Home. Inurnment will be after the service at Wright Cemetery. Following the inurnment there will be a time for family and friends to gather at the VFW.

In lieu of flowers, cards can be sent to Jean SPALLA at 2405 Salina Rd., Fairfield, IA 52556, with memorials to be decided at a future date.

John and Jean (Sis HECKETHORN) were married June 22, 1979, and celebrated 43 years of marriage this year.

John was a proud Veteran serving in the US Army. He was currently active as an officer at the VFW Post in Fairfield.

John was a lifelong employee with the Burlington Northern Santa Fe Railroad. Upon his retirement from the railroad, he became a Consultant for city Metro's, which he did for 14 years.

He was a "Jack of All Trades and a Master of Many." Master Craftsman, Master Electrician and Automotive. He could always be found in one of his two shops -- one for woodworking and one for motors. One of his many talents included restoring classic vehicles.

John enjoyed working with this hands, whether it was woodworking, restoration of antique furniture, building new cabinets, to remodeling. He was always there to help family and friends get the job done. John also enjoyed the outdoors: working in the yard, planting trees, gardening, watching his birds and taking care of his kittens. He enjoyed hunting for food, but more imporatantly, teaching his family to respect the land, wildlife, and the importance of gun safety. If someone needed something fixed or needed help, he was the go-to person for his knowledge and skills. John was always willing to help and never turned down a request for his skills.

He will be greatly missed by many. Grief is the price of love. 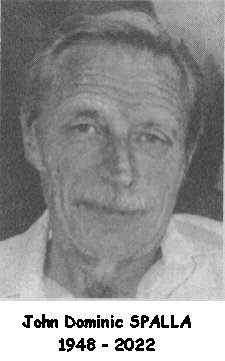