Dale was born on October 28, 1935, at Salina, Iowa, the son of Townsend Guy and Naomi (KRUMBOLTZ) SCHILLERSTROM. He graduated from Lockridge High School in the class of 1954. Following graduation, Dale joined the United States Army in February of 1959. He was honorably discharged in February of 1961. Dale was united in marriage to Marjorie SMITH on July 9, 1961, at the First Baptist Church in Mt. Pleasant. He farmed in the Round Prairie Community until his retirement. Dale was a member of the Round Prairie Baptist Church, where for 67 years he lead the singing (sic). Dale was a 56-year member of the Gideon's International.

Dale was preceded in death by his parents, one brother, Herbert SCHILLERSTROM, and two sisters, Esther HAWK and Roseline HISER.

Funeral services will be held on Thursday, October 27, 2022, at 2 p.m. at the Salem Congregational Church in Salem with Pastor Aaron Helterbran officiating. Burial will follow in the Lambirth Cemetery with full military honors. Friends may call after 2 p.m. on Wednesday at the Murphy Funeral Home of Mt. Pleasant where the family will be present from 5 to 8 p.m. that evening. Memorials may be directed to Gideon's International, Living Water Farms or to Round Prairie Baptist Church Missions in his memory.

Murphy Funeral Home of Mt. Pleasant, is caring for his arrangements. 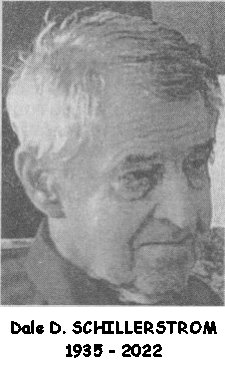