Alva Lee SHERADEN, aged 78 years and 27 days, passed away peacefully in his sleep on Saturday, June 25, 2022, at Parkview Care Center, Fairfield, IA. He was born on May 29, 1944, to Betty Lou (GLANDON) and Alva Paul SHERADEN. He was diagnosed with chronic leukemia during the fall of 2021 and fought a courageous battle. He also battled COVID-19 and in the end, he lived life and gave in to death on his terms.

Alva Lee was known to friends and family as "Buzz"; a nickname he earned from his Grandpa SHERADEN. Grandpa gave him that name because he was full of energy and always 'buzzing' around the house. He was simply "Uncle" to his nieces and nephews and "Unkie" to his great- and great-great-nieces and -nephews. Our uncle never married and had no children, so his siblings and their children were his world.

Our brother and uncle grew up on a farm near Ollie, IA; a place he called home most of his life. His grandparents settled on the land in the 1850s. He attended Pekin Community Schools and graduated in 1962. After high school, he helped his parents on the family farm. As the war in Vietnam escalated, our uncle thought it best to join the service. On June 10, 1965, the very day he received his draft notice, he enlisted in the US Air Force as a Ground Radio Communication Repairman. He spent from May 15, 1968, to May 19, 1969, in Vietnam, where he earned The Air Force Commendation Medal. He received an Honorable Discharge in June of 1969 and came home to attend college.

Our brother and uncle continued his fondness of electronics by enrolling at Iowa Technical College, which later became Indian Hills Community College. He completed the Electronic Computer Maintenance Program in March of 1971, graduating second in his class. Shortly after graduation he accepted a position with Philips Electronics, specializing in electron microscope repair. He moved to Kansas City, KS where he would spend the next 21 years of his professional life. He traveled a lot with his work. An average week in his life was a plane ride on Monday morning and Friday afternoons. At one time, he was lead repairman on every microscope west of the Mississippi River. He rarely spent time in his home, though he never complained about the travel. Ultimately, he moved to Gahanna, OH in 1992 to be near the last of those scopes at Ohio State University. Our Uncle retired in 2001 after over 30 years of dedicated service to Phillips. He was truly an example of dedication and commitment to a profession he truly loved.

Our brother and uncle will best be remembered by his laughter. He loved a good joke for sure. We believe his favorite laughter was through the stories of his family. His ideal vacation was to come back to his roots and spend time with family. We tasked our uncle greatly as young children. He always rose to the occasion and engaged every sport where he saw a challenge. In football, he ran routes and passed to us. If you gave the man a bat, ball, and glove, he pitched to us, caught fly balls, and batted balls to us. He shot hoops with us at every opportunity as well. We sought his reward with every sport, and it came in the form of verbal approval: "Nice one" he would say. Simple, yet very effective.

He loved to fish and never turned down the opportunity to go on a fishing expedition. He enjoyed the simplicity of Iowa farm ponds in southeast Iowa. He loved to fish for catfish as that allowed him to seek the next laugh life had to offer. He was never one to turn down whatever took his bait or lure. His greatest reward with this passion was a summer fish fry. His nephews will miss his presence along the bank.

He was an avid card player as well and loved the game of Pepper. This game always broke out at family Thanksgiving and Christmas gatherings. He was modest and sly with every hand. He was the one you wanted as your partner, and you feared him if you went against him. He was a man of few words and let his actions speak loudest. His true enjoyment came from the laughter we shared during the game. It was all about family all the time with him.

Our brother and uncle was a great man and will remain so in our hearts and minds forever. His laughter was infectious as was his love for his life and family. We will miss him greatly and we will reflect on the impact he had on our lives forever.

A memorial was established in his honoar (sic) with the Jefferson County Relay for Life (American Cancer Society). Contributions can be sent to Donna WOLF, 1276 Packwood Road, Packwood, IA 52580.

Thank you for taking the time to read about our brother and uncle's life.

Celebration of Life Services for Alva Lee SHERADEN of Packwood will be held at 10:30 a.m. on Saturday, Sept. 3, 2022, at the Packwood Christian Church in Packwood, Iowa. Military rites will take place following the Church Service at the Ollie Cemetery. A luncheon will take place afterwards at the Packwood Christian Church. A memorial was established with Jefferson County Relay for Life and can be sent to Donna WOLF, 1276 Packwood Road, Packwood, IA 52580. 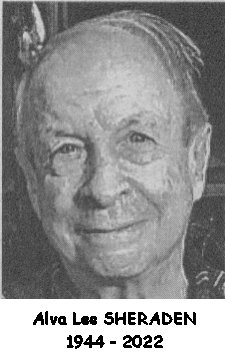