She was born in Fairfield, IA to John and Elanor (PARSONS) FICKEL on February 23, 1931. Darlene graduated from Fairfield High School and received a BS from the University of Iowa.

She was married to Donald Edward BEAUCHAMP on September 6, 1960, in Chicago, IL. They had three children together. She spent many years as a homemaker, and most of her career at Honeywell before retiring.

She is survived by her son, Brian BEAUCHAMP and his wife, Elizabeth (Beaverton, OR); daughter, April BEAUCHAMP BOUISE and her husband, Jaime (Phoenix, AZ); and granddaughter, Mackenzie BOUISE.

Darlene was preceded in death by her parents; siblings, Ralph and Alice; her son, Jon; husband, Donald; and grandson, Maxwel BOUISE.

A private family memorial will be held at Green Acres Cemetery in Scottsdale, AZ. 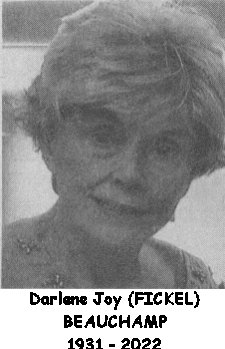