On Monday, July 4, 2022, Judith Ann EDDY passed away peacefully, surrounded by loved ones at the age of 74. Judith was born October 4, 1947, in Fairfield, IA, to Donald William LEPPERT and Alice Louise KENT.

Judith was a natural caregiver, with a compassionate, caring spirit. She married Kimball KELLY. After providing years of childcare, Judith received her nursing degree from Indian Hills Community College, and practiced nursing for over 30 years. They were married for 25 years and raised two children, a daughter Jackie and son Jason. She later married Jack EDDY.

Judith was preceded in death by her father and mother; her brother, Keith LEPPERT; and sister, Donna Jean KREWSON.

A Celebration of Life gathering will be held at a later date.

Donations can be made to the Jefferson County Hospital, St. Jude's Children's Hospital, or Noah's Ark of Fairfield. 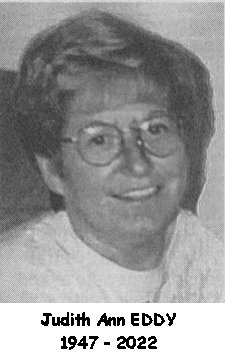