William "Bill" Lee PERRY, 90, of Keosauqua, Iowa, passed away Sunday, May 16, 2021, at the Iowa Veterans Home in Marshalltown, Iowa (note: in Marshall Co., IA). As were his wishes, his body has been cremated. Visitation will begin at 2 p.m. Thursday, May 20, at Pedrick Funeral Home in Keosauqua with the family present to greet friends from 5 to 7 p.m. In lieu of flowers, memorial contributions in Bill's honor may be directed to the Friends of Lacey State Park and can be mailed to Lil PERRY, P.O. Box 145, Keosauqua, IA 52565. Friends may leave online condolences at www.cranstonfamilyfuneralhome.com.

Bill PERRY was born in Fairfield, Iowa, on July 9, 1930, to Earl and Marie "Dolly" TEETER PERRY. Shortly after high school, Bill joined the U.S. Air Force, where he was stationed in Alaska. After returning home from the service, he attended and graduated from Parson's (sic) College. In 1962, Bill married Yvonne ZIMMER. The two later divorced but not before becoming the proud parents of two children, Samuel and Joshua. In 1989, he was united in marriage to Lil DeHART, and they remained by each other's side for over 30 years. Bill's lifelong profession was land surveying. He worked in Florida, Arizona and for French Reneker and Warner Engineering in Fairfield and Mount Pleasant, Iowa. Bill loved hiking in Lacey-Keosauqua State Park. He was the first president of the Friends of Lacey Group, and served as the 1991 president of the State of Iowa Land Surveyor's Association.

Bill was preceded in death by his parents; one brother, Dick PERRY; foster son, Raleigh DeHART; and stepgrandson, Jason FRAZIER.

Left to honor his memory is his wife, Lil PERRY of Keosauqua, Iowa; two sons, Samuel PERRY of Keosauqua and Joshua (Sheila) PERRY of Douds, Iowa; stepchildren, Renee (James) PERRY of Mount Pleasant, Randy PERRY of Douds, Rick DeHART of Keosauqua and Jason (Lucinda) DeHART of Keosauqua; one brother, Don PERRY of Corning, Calif.; his grandchildren and foster grandchildren, Travis BUCH, Maxwell HANNAM, Morgan PERRY, Tessa PERRY, McKenzie WETTRICH, Jennifer BODINE and Jocelyn BARBER, as well as many nieces, nephews, extended family and friends. Bill was a foster parent to 20 children, many whom remain to cherish their memories of him.

Special thanks to foster daughter, Melissa MONTGOMERY for her continued love and support. 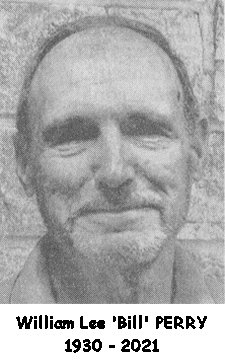