Lyle Alfred ENGLISH, 75, of Mount Pleasant, arrived in Glory on Thursday morning, May 13, 2021, at Parkview Nursing Home in Fairfield.

Lyle was born April 27, 1946, in Washington, Iowa, the son of Alfred and Marie ENGLISH. He was married to Linda L. DROZ on Aug. 26, 1967, in Fairfield, Iowa. Lyle was a graduate of Mount Pleasant High School, Class of 1964. After graduation, Lyle was employed by Blue Bird Midwest, where he faithfully served for 37 years upon the closure of the plant in 2003. He retired in 2012 from City Carton.

Lyle grew up in Trenton, Iowa. The third child in a family of seven children, The ENGLISH's (sic) became an even more closely knit family when Lyle's father, Alfred died unexpectantly at 45. Many remember Lyle in his younger years. He was a member of the Trenton Angels and was well known as a fighter. He never backed down from a fight and legend has it that he never lost one either. That is until Lyle met his match on Feb. 13, 1975, when the Lord Jesus Christ conquered Lyle's heart and he committed his life to Jesus in the upstairs study of Pastor Dietz in the parsonage of Trenton Missionary Church. From that day on, Lyle's passions were redirected as he committed to fight for the glory of Christ and the furtherance of Jesus' Kingdom.

After Lyle was employed by Blue Bird Midwest, he found an extended family he did not expect. Lyle was very fond of Blue Bird and working alongside his brother-in-law Ivan ALTER, as well as many others who he quickly embraced as family. He thoroughly enjoyed participating on the Blue Bird baseball team, and when Blue Bird closed in 2003, Lyle took it as hard as losing a family member. He deeply loved his Blue Bird family.

Lyle was an avid and devoutly loyal sports fan. He was especially passionate for his beloved Mount Pleasant Panthers and Iowa Hawkeyes. Lyle was faithfully heard enthusiastically bellowing his support fo rthe Panthers and vehemently lambasting those "crooked" referees from the top of the stands at Mapleleaf. He was particularly proud of his son Steven when Steven played football, as well as excelled in field and track (the order is purposeful) at Mount Pleasant. When Steven became a Hawkeye, he was overjoyed. Lyle enjoyed being outdoors. He adored spending time mushroom hunting with his daughter Marlene on his sister and brother-in-law's farm in Trenton. He also loved hunting and fishing with his family members.

Lyle was especially grateful, blessed and smitten with a deep love for his six grandkids. When he was able to do so, he would shower them with love and affection.

He was preceded in death by his parents, Alfred and Marie ENGLISH; daughter, Marlene "Molly" ENGLISH; and sister, Joyce (Bill) BACHMAN.

The great evangelist Dwight Moody once said: "Some day you will read in the papers, 'D.L. Moody of Northfield is dead.' Don't believe a word of it! At that moment I shall be more alive than I am now; I shall have gone up higher, that is all, out of this old clay tenement into a house that is immortal--a body that death cannot touch, that sin cannot taint; a body fashioned like unto His glorious body. I was born of the flesh in 1837. I was born of the Spirit in 1856. That which is born of the flesh may die. That which is born of the Spirit will live forever!"

By now you have read that Lyle ENGLISH has died. Don't believe a word of it! He is more alive than he ever has been! He was born of the flesh in 1946. He was born of the Spirit in 1975. And today, because of Jesus Christ ALONE, he lives with his Savior forever! 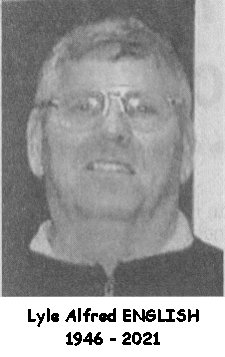