Wayne G. MARTIN, 83, long-time resident of Toledo, passed away peacefully at his home on Jan. 5, 2021, with his family at his side and supported by Mercy Hospice of Cedar Rapids. A Celebration of Life will be announced by the family at a later date.

Wayne was born to Carl and Delpha (NICHOLS) MARTIN on Sept. 18, 1937, in Glasgow, Iowa. He married the love of his life, Phyllis Elaine HUFFMAN, on Aug. 23, 1957. Together they raised three children in Toledo, where Wayne patrolled the highways as an Iowa State Trooper for 26 years retiring in 1992. He then worked as the Toledo Chief of Police for 11 years until he reached mandatory retirement age. Wayne and Phyllis also owned a thriving carpentry business. where they worked side by side to service (sic) the needs of the community.

Wayne found immense satisfaction in helping his fellow man and epitomized a spirit of servitude throughout his life. He would often be running off to repair a garage door, mow somebody's lawn or take a friend to a doctor's appointment. Wayne was a loving caregiver to his wife through her long struggle with Parkinson's. They enjoyed morning coffee hour with the gang at Hardee's, traveling, especially to Branson to watch their favorite performers, and spending time with their grandchildren and great-grandchildren.

He was preceded in death by his wife, Phyllis; his parents; brother, Tom MARTIN; sister, Evelyn GORDY; and one granddaughter, Kelsey MEISNER. 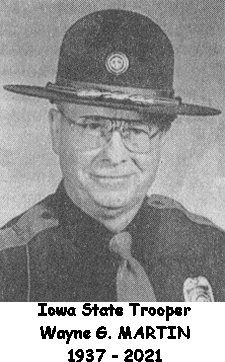