Lawrence "Larry" Joseph DAVITT, 83, of Bettendorf, Iowa, passed away peacefully on March 31, 2020. He now is in the splendor and glory of our God.

Larry was a graduate of Fairfield High School, Class of 1956. He attended Mass at Our Lady of Lourdes Catholic Church in Bettendorf, where he was a proud member of the Knights of Columbus. Larry enjoyed supporting the Chicago Cubs. He really enjoyed their World Series win in 2016.

Larry was the son of James (Jay) Patrick DAVITT and Ellen Agnus McLAUGHLIN DAVITT, who preceded him in death. Larry was the brother of Mary DAVITT NASH (Thom) of Davenport, Iowa, Julia DAVITT NEFF (Jim) of DeKalb, Ill., Elizabeth (Liz) DAVITT POHREN (Larry, deceased) of Fairfield, Iowa, and Patrick (Pat) DAVITT (Jane) of Texarkana, Texas. Larry had many nieces and nephews, two of whom preceded him in death, Jeff POHREN and Patrick NEFF. Larry's family rests in the knowledge that those who have preceded him in death have greeted him and ushered him into a new life, where he is with the God he faithfully worshipped.

A private gathering of Larry's brother and sisters and their spouses will be held for a graveside service. Larry will be laid to eternal rest next to his parents in Memorial Lawn Cemetery, Fairfield, Iowa. A memorial Mass will be celebrated in Larry's honor at a later date. 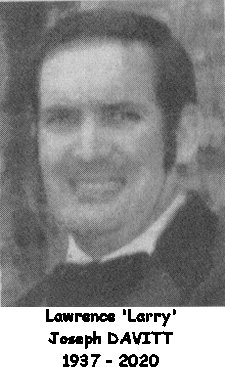