Per Jerry's wishes, the body has been cremated and there will be no services.

A memorial has been established, cards and memorials can be sent to Sherry EHRHARDT, 2195 Greenbrier Circle, Fairfield, Iowa 52556.

Jerry was born in Jefferson County on August 17, 1941 to Eugene and Millicent (STONER) EHRHARDT. He married Sherry WHITMORE on July 3, 1982. This year they would have been married 37 years.

Jerry lived in the Fairfield area all his life and made a career of farming. His love for the outdoors continued by working in his and Sherry's garden. Jerry was a NASCAR fan and liked to watch old western movies. What meant the most was spending time with his family.

He was preceded in death by his parents; one brother, Bobby EHRHARDT; and one sister, Becky JAEGER. 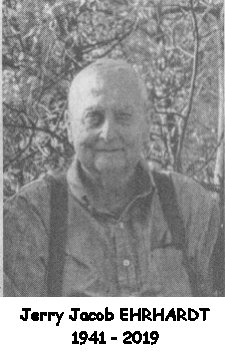