According to Sally's wishes the body has been cremated.

A Celebration of Life service will be at 4:00 p.m., Tuesday, June 4, 2019, at Foursquare church with Pastor Matt Crowl officiating. Burial of cremains will be at a later date.

In lieu of flowers, memorials can be made to Compassus Living Foundation or Pancreatic Cancer Action Network. Cards and memorials can be sent to: Daryl BODEN, 115 East Lincoln Ave., Fairfield, Ia. 52556.

Sally has lived in Fairfield for the last 7 months, with previous residence in Chester, MD. Sally was a teacher and Librarian at Queen Anne's County Public School System for 30 years. Her hobbies and interest included gardening, reading and doing crafts, most important to her were her faith and spending time with the grandchildren.

Sally was preceded by her parents; and one sister, Martha Ellen SUFFERN. 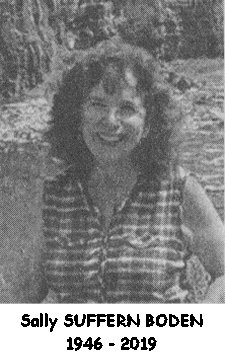