Donald A. BUTNER 92, of Marshalltown formerly of Lockridge passed away on Sunday, November 26, 2017, at the Iowa Veterans Home in Marshalltown (note: in Marshall Co., IA).

Funeral arrangements are pending at the Murphy Funeral Home of Mt. Pleasant.

Donald A. BUTNER 92, of Marshalltown formerly of Lockridge and Mt. Sterling passed away on Sunday, November 26, 2017, at the Iowa Veterans Home in Marshalltown.

Don was born on September 20, 1925, at Fonda, Iowa the son of Linn Houston and Esther JACKSON BUTNER. Don was united in marriage to Norma Jean SIPP on April 3, 1947, she preceded him in death on October 5, 2000. He was a World War II Veteran serving his country in the United States Navy and the United States Airforce for 22 years. He worked at the Iowa Ammunition Plant in Middletown until his retirement. He enjoyed hunting, working on cars, reading and watching western movies.

He is survived by his children; Darrell (Eileen) BUTNER of Tipton, Iowa, Forrest (Lynne) BUTNER of Modesto, California, Beth HOLTKAMP and Bill (Janice) BUTNER all Douds, Iowa, and Marian (David) GRABER of Lockridge, 19 grandchildren and 30 great grandchildren and his sister; Betty SMITH of Early, Iowa.

Don was preceded in death by his parents, his wife, one son Lloyd BUTNER, one daughter Donna JOSEPHSON, a grandson David BUTNER, a grand-daughter Michele ABERNATHY, his brothers; Linn BUTNER, Jack BUTNER, Homer BUTNER, Wilbur BUTNER and a sister; Letha KIBBEY. Online condolences may be sent to the family at www.murphyfuneralandmonuments.com 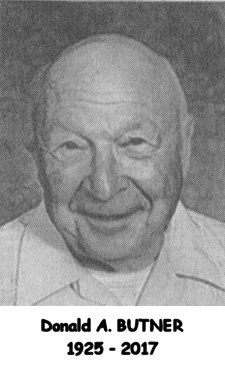