Funeral Service will be, 10:30 am, Thursday, November 2, 2017, at Behner Funeral Home with Pastor Frosty Van Voorst officiating. Burial with military rites will be at Memorial Lawn, Fairfield, IA.

Herbert was born August 11, 1924, in Glendale, IA to Lawrence and Lydia (MONSON) JOHNSON. He married Betty "Jean" BRERETON September 1, 1946 at the First United Methodist Church. This year they celebrated 71 years of marriage.

Herb served in the Army during World War II. He drove a school bus for 11 years and was a route salesman for Randy's Meat for 18 years. Herb was a member of the American Legion and VFW. He was a past president for the Fairfield and Lockridge Lions Club and on the city council in Lockridge. Herb was on the board for Little League and Babe Ruth and he helped start Little League in Lockridge. He was also a 4-H leader in Lockridge. Herb and Jean attended all Fairfield sports and was an avid Cyclone fan. He enjoyed restoring toy trucks and attending the Bomber Group reunions.

He was preceded in death by his parents, Lawrence and Lydia JOHNSON; two grandchildren; and one sister, Doris HILDEBRAND. 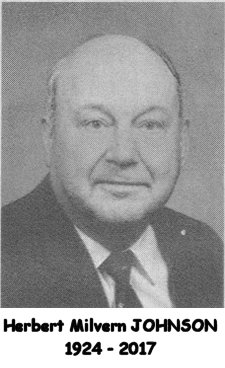