A graveside service will be 10:30 am, Thursday, June 15, 2017, at Memorial Lawn Cemetery with Father Nick Adam officiating.

A memorial has been established in Kaison's name. Cards and memorials can be mailed to: 502 E. Fillmore Ave., Fairfield, Iowa 52556.

While Kaison was at the University of Iowa he touched many lives. He most generally had a smile on his face and could express his emotions with his eyes. 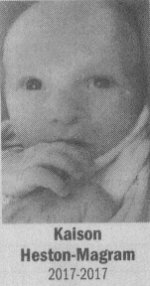