The funeral is 10:30 a.m. Thursday at St. Mary Catholic Church in Fairfield, with the Rev. Nick Adam officiating. Interment will be at Memorial Lawn Cemetery in Fairfield.

The family will receive friends from 9:30 a.m. until the service Thursday at the church.

Memorials can be made to the Polishville Association and mailed to Bill Peck, 1157 Raspberry Ave., Brighton 52540. Online condolences can be made at www.raymondfuneralhomes.com.

She graduated from Brighton High School and taught at the Germanville and Linn country schools. She worked at the Fairfield Glove & Mitten Factory from 1946 until 2000.

Mrs. SCHILLERSTROM was a member of St. Mary Catholic Church.

Survivors include: three daughters and their husbands: Jean and Bob MEINDERS of Ottumwa, Joni and Joel ROLLINGER of Decorah, and Jolene and Dennis of Lantana, Texas; five grandchildren; sevel great-grandchildren; and stepchildren including Elizabeth WEST, Mary JARVIS and Roy SCHILLERSTROM.

In addition to her husband, she was preceded in death by: her parents; and three brothers, Gene SHEMANSKI, Stanley SHEMANSKI and Raymond SHEMANSKI in infancy. 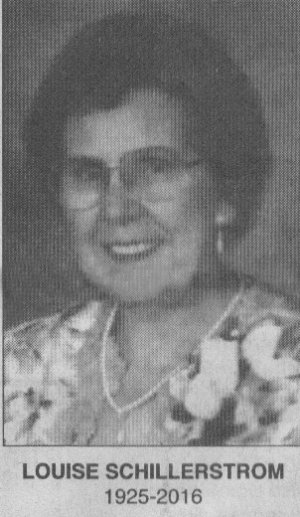