A memorial service will be held at a later date.

Memorials may be made to the American Cancer Society.

Mrs. LAWSON was born in 1924 in Ellsworth, the daughter of Clarence Anderson and Vera PARKS.

Mrs. LAWSON attended Parsons College in Fairfield before enrolling in the Curtiss-Wright Cadet program at Iowa State College in Ames. During the war years, she worked at the Curtis-Wright (sic - Curtiss-Wright) plant in Buffalo, N.Y., as an aircraft engine tester. After moving to Virginia, she earned a nursing degree from Petersburg General Hospital School of Nursing. She worked 17 years in the nursing field and retired as a nursing home inspector with the Virginia State Department of Social Services in 1986.

Mrs. LAWSON's interests included music and travel. As a member of the Friendship Force, she traveled in the Pacific and Europe and hosted exchange students from Germany and Ecuador. She enjoyed teaching English as a second language. 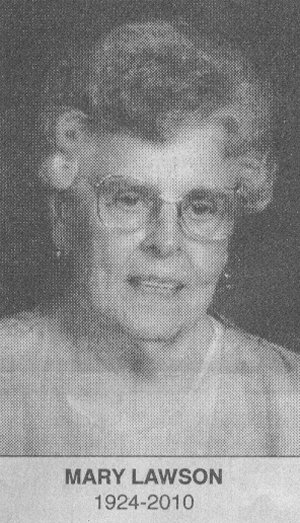