A funeral mass will be at 10:30 a.m. Wednesday at St. Mary Catholic Church in Fairfield, with the Rev. Stephen C. Page officiating. Interment, with military honors, will be in Memorial Lawn Cemetery in Fairfield.

Family visitation will be from 4-7 p.m. Tuesday at Raymond Funeral Home in Fairfield, with a wake service at 6:30 p.m.

Memorials may be made to the Marvin Kitch memorial fund.

Online condolences may be sent at www.raymondfuneralhomes.com.

Mr. KITCH grew up on the family farm, 2 miles north of Mount Pleasant until moving to Milton, where he graduated from Milton High School. Mr. KITCH attended Parsons College in Fairfield. He served in the U.S. Army during World War II.

Following Mr. KITCH's military service, he moved to Fairfield where he farmed. In addition to farming, he was a feed and seed dealer. He had worked at the Ordinance Plant in Fort Madison and the Dexter Company in Fairfield.

He was preceded in death by his wife; his parents; two infant daughters, Marla Rae and Suzanne; two infant sons, Leslie and Terry; three brothers, Reuben, Bill and Donald KITCH; and one sister, Jean McGEE. 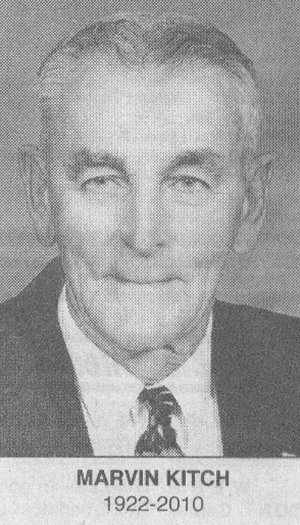