A funeral will be at 1 p.m. Saturday at Behner Funeral Home in Fairfield, with the Rev. Suzanne Swahn officiating. Burial will be in Memorial Lawn Cemetery.

Family visitation will be from 7-8 p.m. Friday at the funeral home.

Memorials may be made to First Christian Church (Disciples of Christ), American Lung Association or Hospice and sent to Shirlene CONDER, 700 W. Alta Vista, Lot No. 16, Ottumwa 52501.

Mrs. CREW graduated from Douds-Leando Consolidated High School in 1938. She was a homemaker.

Mrs. CREW was a member of First Christian Church (Disciples of Christ).

Survivors include one daughter, Shirlene CONDER and husband Jim SLOAN of Ottumwa; two grandchildren; four great-grandchildren; and one sister, Darlene FELGAR of Fairfield.

In addition to her husband, she was preceded in death by her parents; one daughter, Marlee MINEART; and two sisters, Madoma BURFORD and Reva DALE. 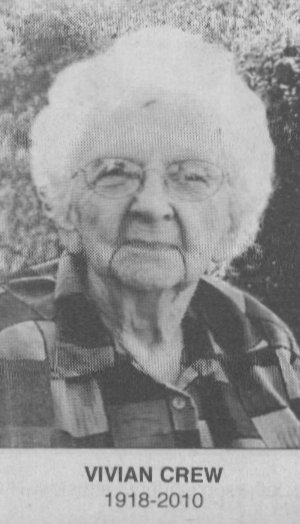