Brett W. HALL -- We said good-bye to Brett on Monday, April 12, 2010. Brett's death was due to complications from lymphoma. He was born and raised in Birmingham, IA on October 18, 1967 to Rex & Diane (DAVIDSON) HALL. Brett graduated from Van Buren High School and received his BA Degree in Music Education at Central College in Pella.

Brett started his teaching career in Sigourney. He was the Director of Bands at Knoxville High School and Newton High School. Brett continued to contribute his time, talents and instruction to Skyryders and the Colts Drum and Bugle Corps from 1986-2002. He was most recently employed at Childserve in Johnston. Brett influenced and encouraged a plethora of musical students throughout his life.

A memorial service will be held 11 a.m. Saturday, April 17, 2010 at Heartland Christian Camp in Birmingham, Iowa. Family will be present to greet friends from 10-11 a.m. at the camp.

In lieu of flowers, memorial contributions may be given to the family, who after thoughtful consideration, will determine an organization to receive them.

Arrangements are being handled by Hamilton's Funeral Home, Des Moines. 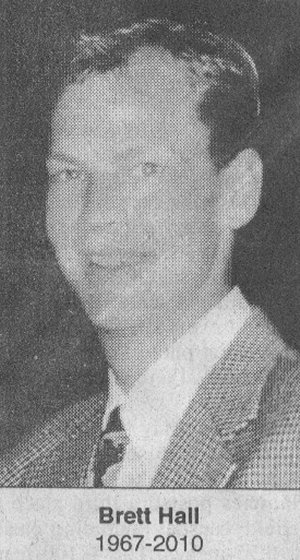