Raymond and Rosemary LONG DAKE will celebrate their 70th wedding anniversary on Aug. 27. On that date in 1950, the couple were married in Walker, Iowa. Their children include Carolyn DAKE BARTEMEYER and Randy BARTEMEYER, Kim and Penny DAKE, Brian and Cheryl DAKE, and Bruce and Susan DAKE. Raymond and Rosemary have 11 grandchildren and have 17 great-grandchildren (soon to be 18).

The couple lived in Coggon, Iowa, while raising a family. Later, Raymond changed careers from cultivating the land to caring for the land with the Soil Conservation Service. Initially, the family moved to Mt. Vernon, Iowa; then on to Blakesburg, Iowa; and finally to Fairfield, Iowa. Raymond is an active member of the Lion's Club while Rosemary is a seamstress. Both are members of the First United Methodist Church of Fairfield.

Cards of congratulations can reach the couple at 108 Cardinal Drive, Fairfield, Iowa 52556. 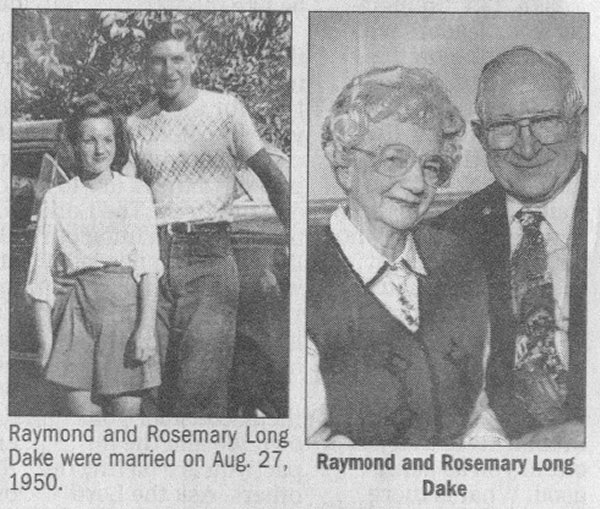