The 60th reunion for the FHS Class of 1959 was held at the Elks in Fairfield both Friday and Saturday evening Oct. 4-5, 2019. Some people attended the Friday night Homecoming football game. Most gathered at the Elks to eat together and have much memory bashing for the evening.

Jim and Marily SHEETS enlisted the aid of Lee Morton to offer some classmates rides in their 1959 Jeep and cars from Lee's collection in the Homecoming Parade on Friday afternoon. Saturday night, a buffet dinner was held and a short program after. Bob ALLISON addressed the group as Master of Ceremonies and spoke of how our class was the first to become Fairfield Community School District with Libertyville and Lockridge High Schools joining us. He asked all to introduce themselves and give a thumbnail of their life if they cared to.

Carolyn OWENS read the names of our deceased classmates. The committee was commended for the great time everyone had throughout the weekend. The committee as (sic) composed of those who meet in Fairfield the first Thursday of each month for coffee and call themselves the Coffee Klatch. They are: Connie ABBOTT ROBERTSON, Bob ALLISON, Shirley BOUGHNER, MOSINSKI, Leo Brokken, Barbara BURGER HIRSCHLER, Colee Coop Hospers, Bob DANIELSON, Ron FISCHER, Carolyn LAUDON OWENS, Jim and Marilyn SHEETS and Patti WINFREY RALPH-NEELY. Much reminiscing was enjoyed for the remainder of the night.

The following students attended along with their guests: 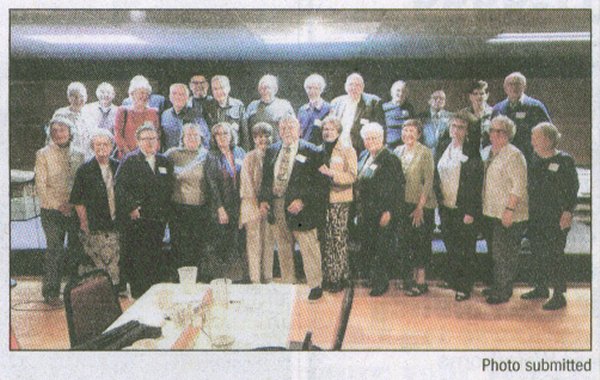