MOUNT PLEASANT (GTNS) -- 2nd Lt. Jack SROUT was returned to American soil decades ago. His medals, including a Purple Heart, arrived Feb. 10, 2012, exactly 68 years to the day after he married Bev LITTON -- the girl he'd swept off her feet at Fairfield High School.

For his former wife it provided a bit of closure, although Mount Pleasant's Bev HODSON quickly added that nothing really ensures closure. "They say there is closure, but there isn't. I still think of him every day."

She also things (sic - thinks) of her son Jackie she had with SROUT.

In less than two years, HODSON suffered through two tragedies. Her husband Jack was killed on a bombing mission in Germany June 21, 1944, just over four months after she married him. They had a son Jackie, who was killed in an automobile accident in Mount Pleasant Jan. 21, 1945 (sic - Jackie was born Jan. 21, 1945, and died April 3, 1946).

HODSON didn't think about her late husband's medals until recently. That's because she married Jack HODSON April 2, 1946, and has had a good life following the early double dose of tragedy.

"I have had a very good life' she said from her Sunny Brook apartment. "Both of my husbands were wonderful men [Jack HODSON died Sept. 28, 1999, and the couple was married for nearly 54 years]. They were kind, good men and easy to live with. I still miss them and all the little things. There are a lot of good memories."

HODSON met SROUT while in high school at Fairfield. "He just swept me off my feed as did Jack HODSON."

SROUT was the bombardier on one of 935 bombers dispatched June 21, 1944, to bomb motor industry targets in Berlin, Germany. Nineteen bombers were lost on the mission, known as "Frantic." The planes were to bomb Berlin and then land at a Russian airfield.

According to a report, SROUT's plane went over the target and dropped the bombs. As the plane was pulling away, flack (sic - flak) hit it. Two engines were knocked out along with all the radios and the hydraulic system. The plane was at 27,000 feet and because no fires had broken out, it was decided to fly it to the Russian airfield. Shortly later, both engines were on fire -- a fire that could not be distinguished (sic).

Since the plane was still in the Berlin area, the pilot didn't want to bail out the crew over hostile territory, The plane still had 900 ballons of gasoline left and descended to 20,000 feet. When the plane left the Berlin region, the pilot started ordering the crew out. But not all the crew, including SROUT had bailed, before the plane blew up. Five members of the nine-member crew died.

HODSON learned her husband was missing in action July 6, 1944, and received word of his death July 21, 1944. He is buried in Fairfield. (sic - in Memorial Lawn Cemetery with son Jackie)

Due to her hapiness and her marriage to HODSON, who was a car salesman and co-owner of the former Hodson-McKim Motors in Mount Pleasant, she didn't think about the possibility of SROUT's medals until she was doing some genealogy recently.

"I never received his death certificate nor his medals," she said. "I contacted Rick Van Winkle [head of the Henry County Veterans Affairs Office], and he was interested and would see if he had any medals coming. Rick was such a big help on this."

The process took about three months and earlier this month, she received the medals -- the Purple Heart, an European-African Middle Eastern Campaign medal; the World War II Victory Medal; and a Honorable Service Lapel button.

"It was very hard losing my husband and son so close together, but Jack HODSON was very patient," she concluded. "I think it was very nice that Jack [SROUT] was remembered through the medals." 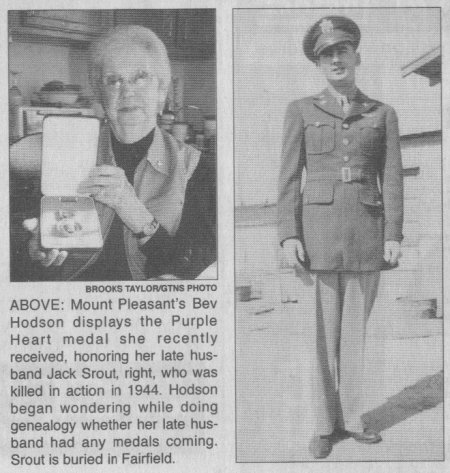