This 1908 real-photo postcard shows William Howard TAFT, fourth from left, making a whirlwind presidential campaign train stop in Fairfield in a 1908 trip through Iowa. The Fairfield Daily Journal indicated that TAFT's train would stop in Fairfield for five minutes between 2:15-2:30 p.m. Sept. 23. Afterward, the newspaper reported under a headline, "Hello, Goodbye," that TAFT's train arrived at 4:15 p.m., he began his speech at 4:15 and 30 seconds p.m. then said he had a sore throat and Iowa Governor CUMMINGS, in front with the hat, would speak. At 4:16 and 30 seconds p.m., the train was speeding toward Ottumwa. Handpicked by President Theodore ROOSEVELT as the Republican presidential candidate, TAFT defeated William Jennings BRYAN in the election for the presidency. 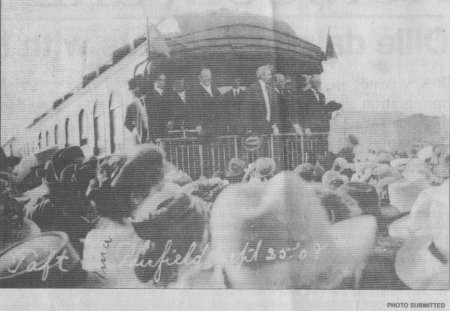