Hon. Daniel Parham STUBBS, who for many years has been known as one of the most successful criminal lawyers in Iowa, was born in the extreme southern part of Preble County, Ohio, on the 7th of July, 1829. His parents, William and Delilah (PARHAM) STUBBS, were natives of Appling County, Ga., the father born in 1795, the mother in 1798, and both were of pure English descent. The grandparents of our subject on both sides were all natives of Georgia, and his maternal grandfather, who served in the Revolutionary War, was present at the surrender of Cornwallis. In 1805 the paternal grandparents emigrated with their family to the new State of Ohio, which State was then only three years old. They belonged to the Society of Friends, or Quakers and were strongly opposed to slavery, which fact led them to seek a home in the first State which had been created from the Northwest Territory, from which that institution had been prohibited.

The subject of this sketch was reared on a farm in his native State, where he received only the educational advantages of a common district school and that of a select school, which was conducted under the auspices of the Society of Friends and which was situated three miles distant from his home. After attaining his majority, he attended Union Seminary in Liberty, Ind., where William Houghton was Principal. Having spent five months as a student in that institution, he engaged in teaching and soon became one of the principals of the seminary, where he was but a short time previous a student. While only a boy on the farm, he conceived the idea of one day becoming a lawyer, and to this end worked in a sawmill for the munificent salary of half a dollar per day, in order to procure money with which to carry out his cherished plan. Thus he purchased his first law book, a copy of Blackstone's Commentaries, which he still has in his library, and while teaching pursued his law studies as he found opportunity. In 1854 he was appointed Deputy Clerk of the court in Union County, Ind., under the Hon. Eghill Burnside, the father of Gen. A. E. Burnside, and who had held that office for twenty-eight consecutive years. While engaged in the discharge of his duties thus devolving upon him, he continued his law studies and learned much of the routine of court business.

Shortly afterward Mr. STUBBS entered upon a systematic course of law study under the direction of the Hon. John Yaryan. About the same time, in the fall of 1855, he married Miss Carrie HOLLINGWORTH, a native of Union County, Ind., and a daughter of Abijah HOLLINGWORTH. The following winter, he entered the law department of Asbury University, under the tutelage of the Hon. A. C. Downing, late Supreme Judge of Indiana. While it was the rule of the University that a student should take a two years' course before graduating, Mr. STUBBS by hard study and close application accomplished the required work in one year and was graduated with the degree of B. L. in 1856. In the spring of that year he assumed editorial charge of the Liberty "Herald", of Liberty, Ind., which supported the Republican cause in the first national campaign of that party. The same year he formed a law partnership with the Hon. N. H. Treuseler.

In the early summer of 1857, Mr. STUBBS started on a prospecting tour with a view of locating in the West. He traveled through Missouri, Kansas, Nebraska and Iowa, and having reached Fairfield, of the last named State, he decided to stick his stakes there and make that his future home. That resolution he has never had reason to regret through a thirty-three years' residence in the community. On establishing himself in Fairfield, he formed a law partnership with the Hon. James F. Wilson, now United States Senator, with whom he was associated for five years. Mr. Wilson soon became prominent in politics and necessarily devoted much time to public matters, while the junior member of the firm gave his undivided attention to a large and increasing law practice and built up a lucrative business. He practiced in the federal courts and was admitted to the bar of the Supreme Court of the United States in 1867.

The subject of politics had its attractions for him and we find the city records show that Mr. STUBBS was elected Mayor of Fairfield in 1859 and re-elected in 1860. In 1863 he was elected to the State Senate and served four years in that body, during which time he was a member of the committees on judiciary and federal regulations and was the author of the resolution which passed the Legislature ratifying the amendment to the constitution of the United States which provided for the final abolition of slavery in this country and which is as follows:

"Whereas, The Congress of the United States has proposed to the several States the following amendment to the federal constitution, viz:

ARTICLE XIII,
~~Section 1. Neither slavery nor involuntary servitude, except as punishment for crime, whereof the party shall have been duly convicted, shall exist within the United States or any place subject to their jurisdiction.

~~Section 2. Congress shall have the power to enforce this article by appropriate legislation; therefore,
~~Be it resolved:, by the General Assembly of the State of Iowa that the State of Iowa, by its Legislature, hereby ratifies and assents to said amendment."

During the last session of his service, Mr. STUBBS was President 'pro tem' of the Senate. He was also the author of the resolution adopted by the Legislature of Iowa, in the session of 1866, in regard to the punishment of Jeff Davis. Mr. STUBBS, from the committee on federal relations, submitted the following majority report:

The Committee on Federal Relations, to whom was referred House Resolution "to hang Jeff Davis" have had the same under consideration and having instructed me to report the same back to the Senate with the recommendation that the following be substituted therefor:

Whereas, the constitution requires that the President shall take care that the laws be faithfully executed, and

Whereas, Jefferson Davis, a prisoner of war, held by authority of the Government of the United States, is subject to be tried for the crime of treason, therefore,

"Be it resolved, by the General Assembly of the State of Iowa that Jefferson Davis is not a proper subject for executive clemency, and it is the duty of the President of the United States to cause the said Davis to be brought to a fair and impartial, but speedy, trial before the proper tribunal, and if found guilty of the crime of treason that he suffer the penalty provided by law."

"That the Secretary of State be and is hereby instructed to forward a certified copy of the foregoing resolution to our delegation in Congress with the request that they present the same to the President of the United States."

Mr. STUBBS was reared an Abolitionist and cast his vote in a Presidential campaign for the first time in 1852, for John P. Hale and George W. Julien. He took an active part in the campaign of 1856 and in that year voted for Fremont and Dayton, the first Republican candidates for President and Vice President. He continued to support the party until 1872 when, like many of the Old Line Abolitionists, he cast his ballot for Horace Greeley for President, since which time he has never been in harmony with the Republican party. In the Presidential campaign of 1876 he voted for Peter Cooper and Samuel F. Cary. The following year he was nominated unanimously for Governor of Iowa by the Independent Greenback party, but without his previous knowledge. He accepted the nomination and made an extended canvass and to the astonishment of both the old parties he received 35,000 votes. In 1879 he was the candidate of the Greenback party for Congress, and while he made a spirited canvass his party strength was not great enough to insure success. In 1880 he received the entire vote of his party in the Legislature for United States Senator.

Ever since entering the political field Mr. STUBBS has been an earnest and influential worker in support of his party principles. As time passed he gradually abandoned the line of general law practice and made criminal and chancery cases a specialty. He won a wide reputation as a criminal lawyer and for many years was employed in a large proportion of the greatest criminal cases tried in Southeastern Iowa. He won special prominence in his defense of the noted desperado, Rand, who was tried in Galesburg, Ill., in the winter of 1878. The strongest prejudice of the whole community was aroused against both client and attorney, yet in a five hours' speech Mr. STUBBS succeeded in averting the death penalty from the prisoner. It is said of our subject that when he is engaged in the trial of a specially difficult or important case that he seems to develop a latent force that makes him a tower of strength. Every faculty seems to expand and quicken; argument, logical and eloquent, greets his hearers. At times, tender and pathetic, or again with fierce energy, he carries conviction to the minds of all. That he has won success and a brilliant reputation in his profession is a fact too well known to be questioned. For several years past, he has only accepted retainers in the more important cases in his favorite line of practice, and since 1887 he has almost entirely withdrawn from professional work. He is a popular stump speaker and does good service in every political campaign.

Mr. and Mrs. STUBBS have four children, two sons and two daughters: Orsino D., the eldest, married Miss Alice STUBBS, a very distant relative, and is engaged with his father in the live-stock business; Charles E. studied law with his father and was admitted to the bar in 1883, then formed a partnership with his father in the law business and is now engaged in practice in Fairfield, besides being largely interested with his father and brother in dealing in horses. He is at present Secretary of the National French Draft Horse Association of America. He married Miss Carrie HUNTER, daughter of Dr. HUNTER, of Newton, Iowa; Cora May, the third child, is the wife of D. C. BRADLEY, of Centerville, Iowa; Minnehaha, the youngest, is unmarried and resides at home.

Mr. STUBBS is liberal in his religious views and is not a member of any religious denomination. He was for some years connected with the Odd Fellows fraternity and is now an Ancient Odd Fellow. In 1885 he purchased the Empire Ranch, a stock farm of four hundred acres, which is situated adjacent to the city of Fairfield on the east, and which is admirably adapted for stock purposes, being largely a blue-grass pasture, well watered and rolling enough to be picturesque and healthful for stock. On this ranch Mr. STUBBS and his sons are carrying on an extensive business in importing and breeding Oldenberg coach and heavy draft horses. He and his son Charles have traveled extensively in Europe in connection with that enterprise and have selected and imported a large number of the finest horses to be found in the Old World. The son has crossed the ocean twelve times in the interest of the ranch and has been very successful in his purchases. Their horses are principally of the French and Belgian stock -- heavy draft animals, yet they have many fine specimens of the coach horse. The ready sale the proprietors of the Empire Ranch have found for their stock and the large number disposed of, testify to the good judgment shown in the selection of the animals for importation. The benefit of this enterprise to the country will be shown by a marked improvement in the growing horses which will make Fairfield one of the most popular horse markets in the West. 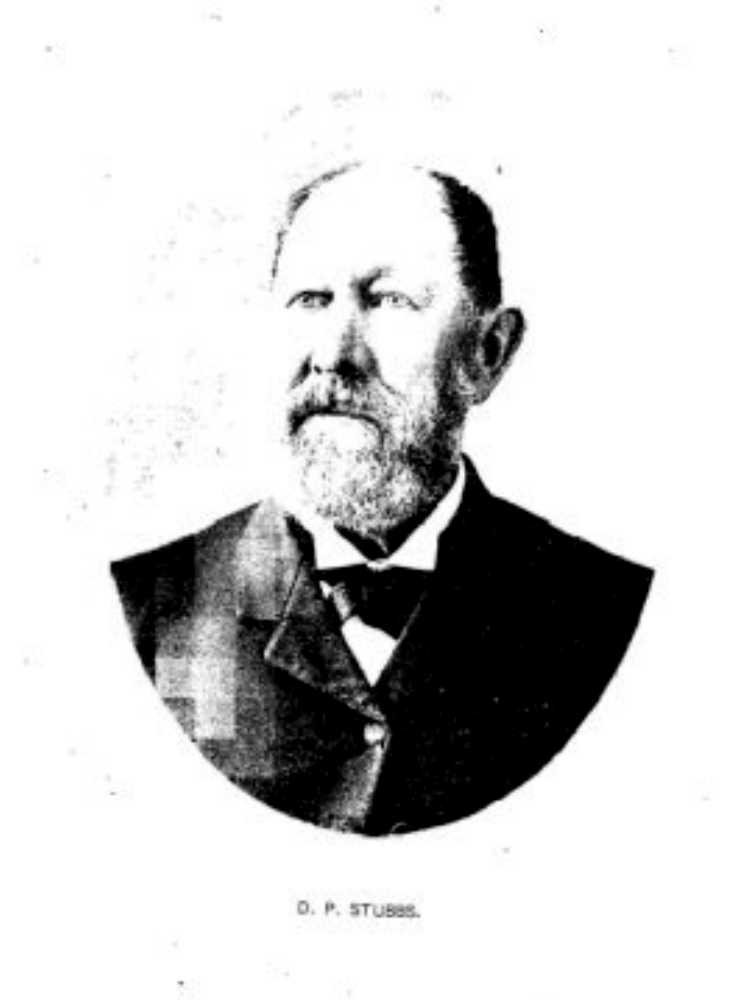