Abraham STANFORD, a retired farmer and respected citizen of Fairfield, Jefferson County, claims Pennsylvania as the State of his nativity, his birth having occurred in Allegheny County, June 17, 1815. Isaac STANFORD, his father, emigrated with his family to Delaware County, Ohio, about 1817, becoming one of the early settlers of that region, but within a few days both parents and two children died. Our subject was then about three years of age. Four children lived to mature years, but only two still survive: Abraham and his brother David, who has been a carpenter, merchant, and farmer.

Little advantage did our subject receive in his youth, but hard labor fell to his lot, and in return he reaped little or no reward. Probably, however, this was the means of developing a self-reliance and energy which have characterized his mature years, and been important factors in his success. On the death of his parents, he was bound out to a farmer for whom he worked until attaining his majority, when he started out in life for himself without a cent which he could call his own. He secured a position as a farm hand at $10 per month, and labored on in that way until coming to Iowa. Believing that he could better his condition in the West, in 1839, he floated down the Ohio and up the Mississippi and Illinois Rivers to Peoria, whence he made his way through Henry County to Cedar Township, Jefferson County. The land in that township had just come into market, and on his return trip Mr. STANFORD stopped at Burlington, and entered one hundred and twenty acres of the same. The following winter he was engaged in splitting rails in Illinois. For some time he was undecided whether to return to Ohio or remain in the West, but having entered his land in Iowa, he at length determined to come to this State, and acted upon his resolution in February, 1840. Not an improvement had been made, and while a cabin was in process of erection, he boarded with Joel BRADSHAW. He spent the day superintending the work, but in the evening devoted himself to the enjoyment of the society of Mr. BRADSHAW's daughter, Miss Nancy. The acquaintance proving mutually agreeable and ripening into a warmer regard, they were married on the 9th of February, 1841. The lady was born in White County, Tenn., March 19, 1825, and when eight years of age, accompanied her parents to Illinois, whence they removed to Jefferson County in 1838.

Mr. STANFORD and his wife began their domestic life on the farm which he had entered, and increased their possessions by the purchase of an additional forty acres. At length having sold, he bought a claim four miles east of Fairfield, of one hundred and twenty acres which he entered, fenced and improved. He also sold this farm, after which he started West, but a few days travel sufficed to convince him that he preferred Jefferson County to any other locality as a place of residence, and he returned and purchased a claim of one hundred and thirty-five acres in Liberty Township. This he also entered and improved, and later traded for a farm of one hundred and ten acres in Cedar Township, upon which he lived until he retired from active business life, and removed to Fairfield in 1882. He still owns ninety-six acres of valuable land which yields him a good income.

The union of Mr. and Mrs. STANFORD was blessed with a family of eight children: Isaac F., the eldest, enlisted in October, 1863, as a member of Company B, Nineteenth Iowa Infantry, and was wounded at the battle of Prairie Grove, Ark. However, he recovered from his injury, but while on the way to join his regiment at Brownsville, Tex., he took the measles and was consequently off duty for some time. Again he started to join his comrades, but having to march some thirty miles through mud and rain, when not yet entirely recovered, he took a backset and died in Brownsville; Joel H., the next younger, is a farmer of Nebraska; Chloe S. is the wife of Samuel DOUGHTY, a Free Methodist preacher; Mary O. is the wife of Hagen DOUGHTY, a farmer of Lockridge Township; Vesta A. is the wife of David BOLEY, of Locust Grove Township; Ella K. is the wife of George MOORE, a farmer of Nebraska; John F. is a farmer of Locust Grove Township; Abraham L. is a cabinet-maker of Fairfield.

Mr. STANFORD has held the office of Township Assessor, and several school offices. He cast his first Presidential vote for Gen. William Henry Harrison, and continued to support the Whig party until 1856, since which time he has been a stanch Republican. He has done not a little to develop the county by improving farms, and has ever been a loyal citizen. Both he and his wife are members of the Methodist Church, of Fairfield. 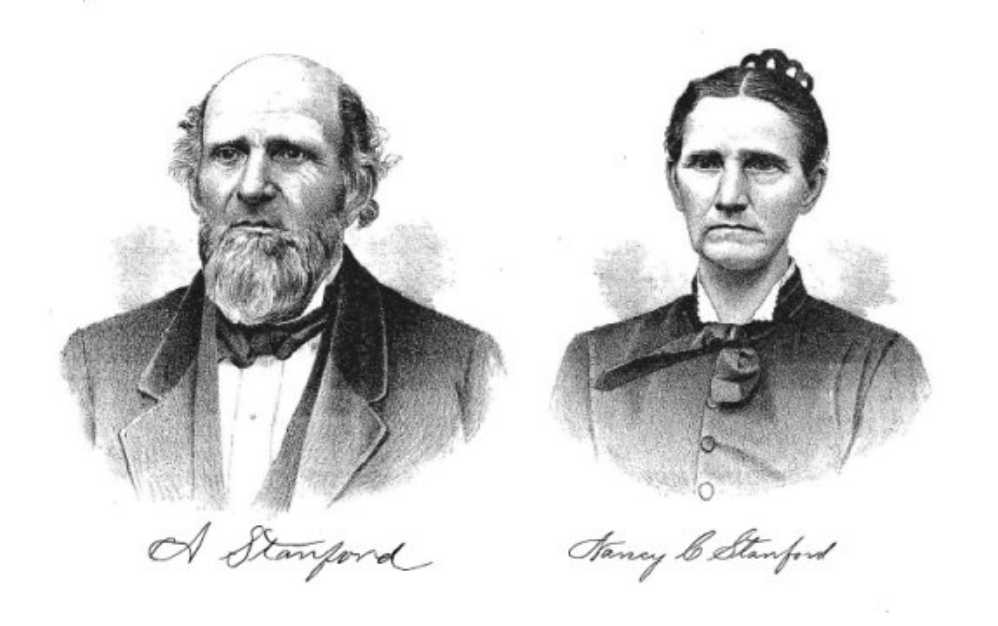