John A. SPIELMAN, a retired hardware merchant of Fairfield and one of the prominent pioneers of Jefferson County, was born in Columbus, Ohio, July 10, 1834, and is the son of John and Saloma (BERGE [sic - BERTSCH]) SPIELMAN, whose sketch appears on another page of this work. Our subject came to Jefferson County with his parents in the spring of 1840, and spent the succeeding ten years of his life on his father's farm in Walnut Township, attending the primitive schools of pioneer times or aiding in the cultivation of the homestead. In 1850, when sixteen years of age, he returned to his native city and entered the Capital University, where he pursued his studies for two years. He then served an apprenticeship to the tinner's trade and in the fall of 1855, when a little past his majority returned to Iowa. For a year and a half he worked at his trade in Burlington and then went to Mt. Pleasant, where he engaged as a clerk for Presley Saunders, the pioneer merchant of that town and after spending a year in that place started a general store in a little village in Jefferson County, called Germanville, which was situated in Walnut Township. He was there married on the 24th of April, 1860, to Miss Christina HIRSCHBERGER, a daughter of Godfrey HIRSCHBERGER, and a native of Lancaster, Ohio.

In the Presidential campaign of the same year, when Lincoln was the nominee for President, Mr. SPIELMAN organized a company of Wide-awakes which he drilled and subsequently, after the breaking out of the war, converted many of them into soldiers. He raised a company for the Seventeenth Iowa Regiment -- Company D -- and also a part of Company K. In February, 1862, he was commissioned Second Lieutenant and leaving his wife to carry on the store, marched to the front. The Captain of his company was dismissed from the service and Lieut. SPIELMAN should have succeeded to the captaincy, but by some mistake the order was never enforced. However, the command of the company devolved upon Lieut. SPIELMAN who acted as captain until his former superior officer was reinstated when he resigned, after eighteen months of active service. He was commissioned Captain on Gen. John E. McPherson's staff, but the commission did not reach him until after his resignation. Capt. SPIELMAN took part in the seige of Corinth and the battle of Iuka, and after the engagement at the former place on the 2nd, 3d and 4th of October, the regiment was complimented by Gen. Rosecrans, who said that it had captured more prisoners and colors than any other regiment in the field. Our subject was in command of his company during Grant's march in the rear of Vicksburg, participated in the Yazoo expedition, the battle at Grand Gulf, Miss., on the 1st of May, 1863, fought at Bayou, Miss., Port Gibson, Black River and the battle of Raymond, May 12; participated in the capture of Jackson, Miss., May 14, at the battle at Champion Hills, May 17 and 18, the engagement at Black River on the following day and the celebrated charge on Vicksburg, May 27. The Seventeenth Iowa and Fifty-sixth Illinois Regiments were the only two that guarded Ft. Hill which Logan blew up. Capt. SPIELMAN was also in the seige of Vicksburg until after its surrender. A month later he went up the river and on the 18th of August, 1863, resigned his position. Returning from the war he located in Fairfield and established himself in the hardware business which he has carried on continuously since.

Mr. and Mrs. SPIELMAN were blessed with a family of six children, three sons and three daughters -- Henry A., the eldest was born on the 4th of March, 1861, the day on which President Lincoln was first inaugurated, graduated from Carthage College, of Carthage, Ill., married Miss Alice GEIGER and is now a commercial traveler, residing in Fairfield. John G. who graduated from the State University of Iowa, is a civil engineer by profession. Carrie E. is the wife of Rev. C. S. McELHINNEY of the Presbyterian Church, of Columbus Junction, Iowa; Fred A. is a hardware merchant of Fairfield, the junior member of the firm of J. A. SPIELMAN & Son. The younger daughters, May and Louisa Belle, are still at home.

Mr. SPIELMAN and wife are members of the English Lutheran Church, and Mr. SPIELMAN has been prominently connected with that church officially. He was Treasurer of the State Synod for seventeen consecutive years, a delegate to the General Synod six times, and has acted as special agent for the Board of Church Extension of the General Synod, in securing locations for new missions in Iowa and while serving in that capacity aided in locating three churches. He bought the church of his denomination in Burlington and deeded it to the society. He also aided in establishing the church at Davenport and one in Sioux City. He has held the offices of Deacon, Elder, Trustee and Secretary of his local church and has been an efficient worker in the Sunday-school cause, having served as president of the Jefferson County Sunday-school Association and labored in the interests of the State Sunday-school Association. He was also a member of the Board of Trustees of Carthage College and served as its President two years, when he resigned on account of failing health.

Mr. SPIELMAN is a member of George Strong Post, No, 19, G. A. R. and while serving in the capacity of Post Commander had the honor of unveiling the only soldiers' monument in Jefferson County. At the exercises attending that event he presided and made the opening address. He is the father of the regimental organization, was its first president and held that position four years. He has attended all the re-unions in this part of the State and was the presiding officer on the second day of the re-union in Creston, in October, 1886, when Gen. Phil Sheridan was present the last time he was west of the Mississippi. In political sentiment, Mr. SPIELMAN is a Republican and has been an active worker for his party since its organization, aiding not a little in its advancement by his entertaining speeches in its behalf. He has held various local offices, such as township trustee and clerk and Alderman of the city, and is the present secretary of the Old Settlers Association. He is an affable, genial gentleman, well informed, broad and liberal in his views, and enjoys the confidence and respect of a large circle of acquaintances.

[Transcriber's note: The G.A.R. is the Grand Army of the Republic, the fore-runner of the American Legion.] 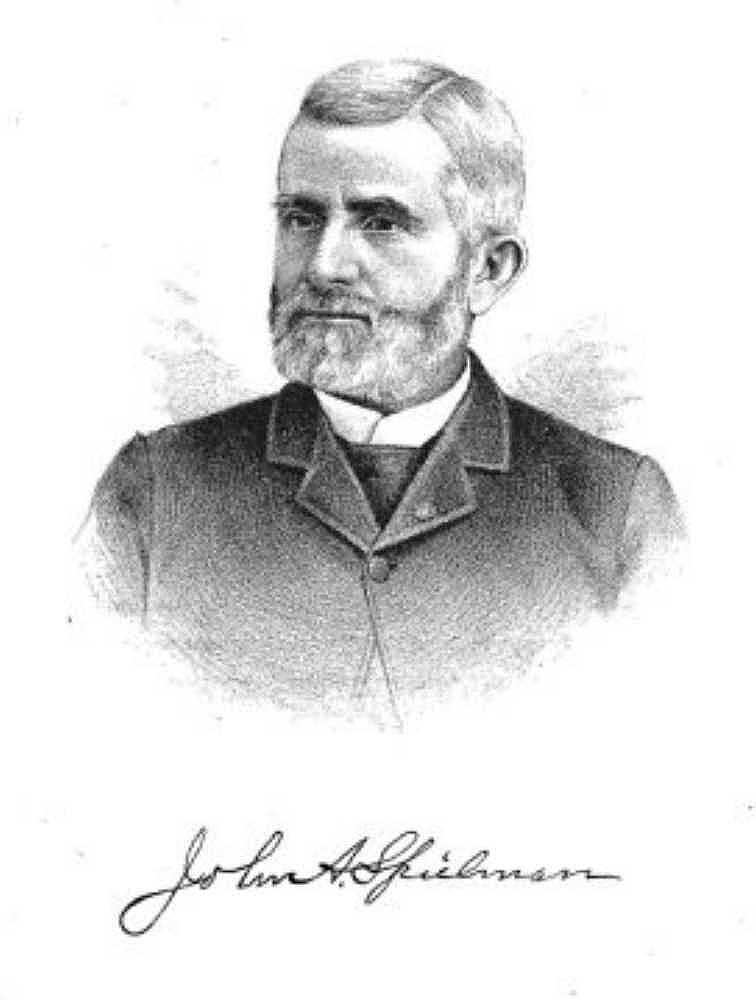