Charles C. RISK, senior member of the firm of RISK, Hufstedler and Whitham, the leading dry-goods firm of Fairfield, and also a member of several other mercantile houses, is a native of the Hawkeye State, his birth having occurred in Washington County, November 16, 1839. His parents, R. C. and Susan (ROBERTS) RISK, were pioneers of Brighton, Washington County, Iowa, of 1837. They were originally from Pennsylvania, and on their emigration to the West located first in Northern Illinois, near Rockford, where they spent a few years and then came to Iowa, settling in Brighton. Mr. RISK's father was engaged in farming and merchandising and is now engaged in loaning money and attending to his landed interests.

The subject of this sketch was reared to farm life and was educated in the private and common schools of the neighborhood. He began his business career as a salesman in his father's store in Brighton and in 1862 was admitted to partnership. One year later he formed a partnership with Charles Kremer, under the firm name of RISK & Kremer, general merchants, which connection continued three years, when Mr. RISK bought out his partner and continued the business one year, when he sold out and removed to Manhattan Mills, Keokuk County. The succeeding two years he spent in milling, and merchandising in that place, part of the time as a partner of his father and part of the time connected with Mr. Bryon. The year 1869 witnessed his arrival in Fairfield, where he embarked in merchandising for himself. In 1871 he took Mr. Sheward, a former clerk, into partnership, but after a year and a half that connection was dissolved. In September, 1873, he associated with him as a partner William M. Hufstedler, the firm being RISK & Hufstedler, dealers in dry-goods, boots and shoes. In 1882 J. M. Whitham bought an interest in the business and the existing firm was formed. The house has a complete tailoring establishment connected with it, and does an annual business of about $30,000.

In addition to the extensive mercantile house in Fairfield, of which he is the head, Mr. RISK is connected with several others of considerable importance in neighboring cities, which he established, and of which he is yet either sole or part owner. In 1869 he established a general store in Libertyville, Iowa, which he operated alone until 1888, since which time Rola Warner has been his partner and is now resident manager, the business being conducted under the firm name of RISK & Warner. When that establishment was placed in good working order Mr. RISK started a general store in Birmingham, Van Buren County, in 1872, and continued operations alone for ten years, when he sold out to Joseph Graham an interest in the business, which is now carried on under the style of RISK & Graham. He is also engaged in milling in Merrimac. The firm of Bryon, RISK & Saltzman are proprietors of the Merrimac Mills, of that place, and are doing an extensive and successful business. During the past year they converted into flour upwards of thirty thousand bushels of wheat, besides grinding some ten thousand bushels of other grain. The firm also owns a stock farm of three hundred and twenty acres in Walnut Township, where they annually feed about two hundred head of cattle. At one time Mr. RISK was running stores at Perlee and Ioka, Iowa, in addition to those previously mentioned, having in all five separate stores at the same time. He did all the buying for the five and kept all Eastern accounts and paid all bills, and during this period kept the books for the Fairfield firm. In connection with J. W. Burnett, he owns the Fairfield Canning Factory, having been identified with that enterprise for three years. He is also owner of a stock farm of about three hundred acres lying in the township of Fairfield, where he feeds about two hundred head of cattle annually. He has been successfully engaged in the stock business for the past five or six years, and during 1889 he fatted and sold two hundred head of cattle.

Mr. RISK is a Republican in politics, but has never sought or desired public office. He has preferred to devote his undivided attention to his extensive business interests, and has been eminently successful in the various enterprises which he has undertaken. Industrious and energetic, possessing good executive ability and a thorough knowledge of mercantile business, Mr. RISK has not only built up an extensive and prosperous business for himself, but has also aided others in getting a start, choosing his partners generally from those who have been his clerks for years and whose ability and trustworthiness he has fully tested. 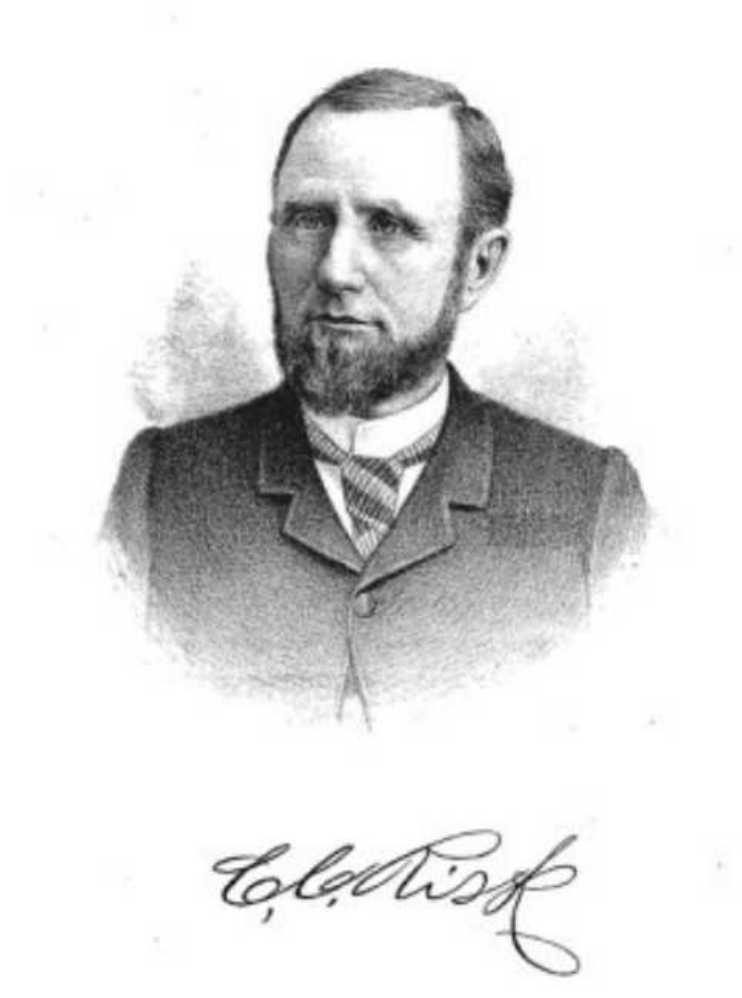