LEWIS ACHENBACH, well-known as a prosperous representative of the agricultural interests of Jefferson county, was born on the farm which he now operates, May 23, 1865. His parents, Ludwig and Margaret (THEOPHEL) ACHENBACH, were natives of Germany. His father, on his arrival in this country, in 1849, located in Ohio, but soon went farther west, choosing Jefferson county, Iowa, for his home. Here, he located near the town of Lockridge and secured employment with the Chicago, Burlington & Quincy Railroad, which was then constructing its road through this region. He continued at this work for several years, when he bought forty acres of land in Lockridge township and engaged in farming. From time to time, he bought more land, increasing the size of his farm, until it comprised one hundred and seventy acres. He cultivated this land till (sic) eight or ten years before his death, when he rented it to his sons, and retired to live free from responsibilities thenceforth. His death occurred in July, 1898. His wife passed away many years earlier, in December, 1882.

Lewis ACHENBACH was brought up at home. He was sent to the Lockridge township schools, where he was educated in the common branches of learning. After concluding his schooling, he assisted with the work on the home farm. When he came of age, he rented land and began to farm for himself, living with his parents, however, with whom he remained until their death. On this occasion, the home farm came into his possession; and to the cultivation of this tract of one hundred and seventy acres he has given his whole energies ever since. He is a practical farmer, and progressive in his methods; believing in the best possible equipment for a farm, in order to attain the most satisfactory results. The buildings, all erected by himself, are well constructed and modern in detail. He raises on an average sixty head of hogs a year; he keeps twenty-five head of cattle and ten horses.

On January 17, 1892, Mr. ACHENBACH was united in marriage to Mary L. GRAF, a daughter of John and Louisa (SNYDER) GRAF. Her parents, too, were natives of Germany, having come to this country with the incoming tide of foreign population, during the middle of the nineteenth century. When her father was old enough, he began to farm, buying for this purpose a farm in Lockridge township. Here he remained till death claimed him in May, 1911. His widow survives him and is now in her seventieth year.

Partial transcription by Doris Challis from Jefferson County Records, Vol. 6. Not related to the subject. Upgraded to the complete transcription with photo in February, 2016, by the County Coordinator, Joey Stark. 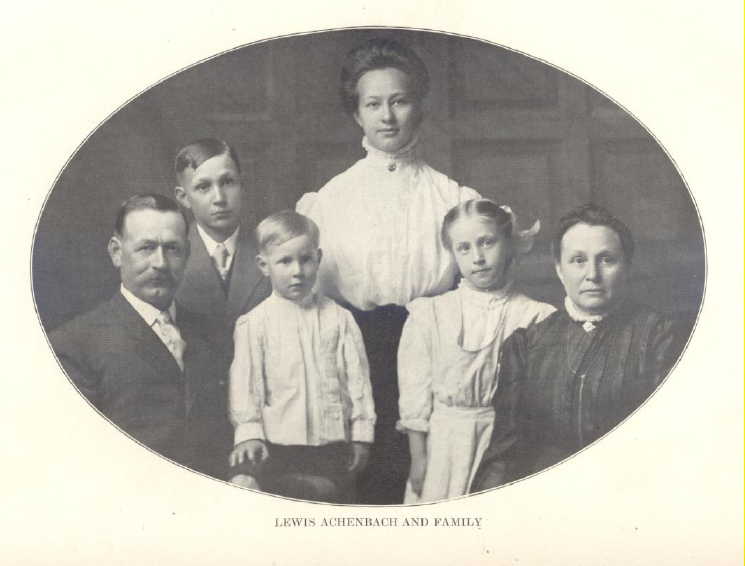