Who's Who in Jefferson County - George J. BONFIELD

Who's Who In Jefferson County
By Herbert F. McDougal

8 yards of 42-inch Henrietta, Mohair or Serge.
2 yards of lining for waist.
6 yards of cambric for skirt lining
1½ yards of crinoline or fibre chamois for holding out the sleeves
1½ to 2 yards of linen canvas for facing bottom of skirt.
5 yards of velveteen or brush binding for edging skirt.
1 set of stays for waist.
5 dozen buttons.
3½ yards passementeria trimming.

That was the bill of goods that milady bought when she fared forth to buy a new dress, back in the days when George J. BONFIELD entered the dry goods business. It wasn't a "frock" in those days, nor a "______" (unintelligible word due to scratched film), but an honest-to-goodness dress, with all that went with it to make it substantial and enduring. And unless it had all the material listed above, it just didn't come up to specifications.

Mr. BONFIELD was 14 years old when he went to work for J. C. Thorne more than forty years ago. The hoopskirt had just gone out, and Mr. BONFIELD fairly trod upon the heels of the bustle and the red flannel underwear, for they were yet lingering on the horizon of fashion. In those days the mother of a family would sally forth, in the early fall to outfit her family, and la, la, what yards of red flannel she would buy to make up in what really were "unmentionables". When she bought the materials for a dress it was a financial transaction. And it called for a dressmaker to come in by the day, perhaps, or maybe the feminine members of the family fell to and the creation was evolved right in the home. Maybe there was a dress form for fitting, but sometimes father, if he were of the correct architecture, would stand patiently for what seemed like endless hours, while mother, with her mouth full of pins, fluttered about him, sighting first from one angle and then another, to get the effect.

All this was before the days of ready-to-wear. Women bought "cloaks", and the "dolman" was the rage. It created considerable of a sensation when the Thornes imported the first Mother Hubbards, the forerunner of the already made women's clothing. There was a half-dozen in the lot and the women gasped when they looked at the display.

Mr. BONFIELD was born in Fairfield, June 10, 1873. His father was a successful merchant who had been apprenticed to the business, back in the old country, County Tipperary, Ireland, for five years. He came to New York, worked for a time in the famous old A. T. Stewart store, and then came west to Burlington where he built up a business, establishing a branch in Fairfield. The railroad at that time had reached only so far as Rome. He finaly (sic) moved to Fairfield and erected the three-story building on the southeast corner of the square, which a later owner named "The Bonnie Block" in his honor. He was hard hit by the hard times that followed the panic of 1873, so when George was 14, he had to go work. He remained with Mr. Thorne for 16 years when he joined with C. W. Wade (sic. Charles William Wade), who had come up from Missouri a few years before and started in business. The Fair then occupied the room that a year or two ago was taken over as the west half of the site of the First National Bank. The front part of the present east room of the Fair was rented, and Mr. BONFIELD came in as the manager of the dry goods department that was installed there. That was in 1903. Five years later they bought the Will Harris clothing stock next door west, and added stock and room to the Fair. 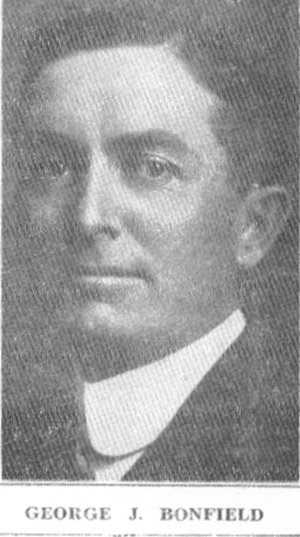