Charles M. THOMPSON, who remained a resident of Jefferson county from 1850 until his death on the 28th (sic - 29th on gravestone) of August, 1897, devoted his attention to farming interests throughout his active business career and won a gratifying measure of prosperity in his undertakings in this connection. His birth occurred in Highland county, Ohio, on the 19th of September, 1833, his parents being Jeremiah and Abigail (HART) THOMPSON. Jeremiah THOMPSON, who was born in Chatham county, North Carolina, in 1800, removed to Ohio with his parents when a youth of thirteen years and there later followed farming. He also took an active interest in politcal affairs as an advocate of the democracy and was several times elected to positions of public trust and reponsibility. In March, 1850, he came to Jefferson county, Iowa, and purchased what was known as the Cameron farm, comprising one hundred and sixty acres of cleared land and eighty acres of timber. He immediately began the task of improving the place and was busily engaged in its operation throughout the remainder of his life. He became widely recognized as a substantial and progressive citizen of the community and it was largely because of his efforts that the Birmingham Lodge of the Independent Order of Odd Fellows was organized. His demise occurred on the 5th of July, 1875 (sic - 1876 on gravestone), while his wife was called to her final rest on the 7th of February, 1891, when eighty years of age.

Charles M. THOMPSON, who was a youth of seventeen when he came with his parents to Iowa, spent the remainder of his life within the borders of Jefferson county. During the years 1855 and 1856 he leased and operated the Rutledge homestead, the widowed owner of which was the mother of Anne Rutledge, the first love of Abraham Lincoln. Eventually he bought a tract of land in Liberty township, cleared and improved the property and subsequently augmented his holdings by additional purchase until at one time he owned four hundred and eighty-six acres of rich and productive land. General agricultural pursuits claimed his attention throughout his active business career and yielded him a gratifying annual income. He was largely instrumental in the organization of the county fair and for twelve years served as a member of its board of directors.

Mr. THOMPSON was married twice. On the 19th of March, 1854, he wedded Miss Sarah Jane McGUIRE, by whom he had eleven children, as follows: James Benton; Silas Madison; Erastus Emery, who passed away in 1869; Ellen; Minnie; Avery R.; Omar; Cora, whose demise occurred in 1869; Walter; Simon; and Clark. The wife and mother was called to her final rest in 1880 and on the 15th of December, 1886, Mr. THOMPSON was again married, his second union being with Miss Clara MEALEY, a daughter of James and Anna MEALEY, who were early settlers of Keokuk county but are now deceased. Mrs. THOMPSON is a niece of the late well known physician, Dr. MEALEY, of Pleasant Plain. After her husband's demise Mrs. THOMPSON adopted a little girl, Violet M. KUTZ, who is now attending the Liberty Ladies' College at Liberty, Missouri.

At the polls Mr. THOMPSON supported the prohibition party, firmly believing that the liquor traffic should be suppressed in the best interests of the nation. He belonged to the Christian church at Fairfield, of which his widow is also a devoted and consistent member. The latter makes her home in Penn township and has an extensive circle of friends, her many good traits of heart and mind having endeared her to all with whom she has come in contact. 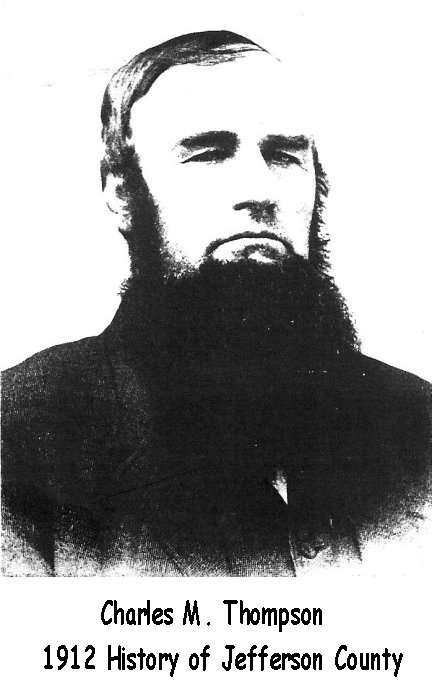