From the rich farming district of Iowa there have come many men who have won success in agricultural lines and are now enjoying the fruits of their labor in well earned retirement. To this class belongs Charles Louis REEDER who for many years was closely identified with farming pursuits, his wise management of which resulted in substantial success. One of Jefferson county's native sons, he was born in Walnut township on the 27th of June, 1855, his parents being Louis and Sadie (SHANBERGER) REEDER. Farm work in all of its various phases early became familiar to him as his youthful days were passed on his father's farm in Jefferson county, which was the training ground upon which he received his preparation for life's practical duties. His intellectual growth had its stimulus in the work of the district schools of Lockridge township, and after laying aside his text-books he devoted his attention entirely to the work of the home fields, assisting his father until the latter's retirement from business and subsequent removal to town. He then operated the homestead independently for some time, and just prior to his father's death purchased the place, consisting of two hundred and eighteen and a half acres. He greatly enhanced the value of the farm by introducing many modern improvements and that his methods were practical and his efforts well directed and effective is indicated by the excellent condition of the place which today ranks among the most desirable properties of the locality. He continued actively in its operation and with the passing of each year the success which attended his labors became more and more substantial until eventually the competence which he had acquired made it possible for him to withdraw from business life. Accordingly on the 10th of April, 1911, although still in the very prime of life, he left the farm to the supervision of his two sons and took up his abode in Lockridge, where he purchased a good property and makes his home, which he is greatly improving.

On the 28th of February, 1884, Mr. REEDER was united in marriage to Miss Anna B. CRAFT (sic - GRAF), who is a daughter of Henry and Anna B. (BOGNER) CRAFT (sic - GRAF), natives of Germany. Her father, a farmer by occupation, came to the United States at an early day, locating in Jefferson county, Iowa, where he entered land from the government. This he cleared and improved, and continued in its operation throughout his remaining days. His death occurred on the 29th of December, 1883, but his wife survived until the 14th of February, 1899. Unto Mr. and Mrs. REEDER were born five children, as follows: John H., aged twenty-six years, now living on his father's farm; George Louis, aged twenty-five years, assisting his brother in the operation of the old homestead; Barbara S., aged twenty-three years, at home; and Henry F. and Mary F., aged twenty-one and fifteen years respectively, also residing with their parents. The family hold membership in the Lutheran church of Lockridge township, and are prominent in the social circles here in which they move. Politically a democrat, Mr. REEDER has ever given stanch support to that party, and although he has never sought nor desired public office, has served for many years as a director of the schools of Lockridge township. He has deep appreciation for the responsibilities of citizenship and has ever cast his influence unreservedly on the side of improvement and progress along material, intellectual and moral lines. He is now identified with the financial interests of the community as a stockholder of the Lockridge Savings Bank. 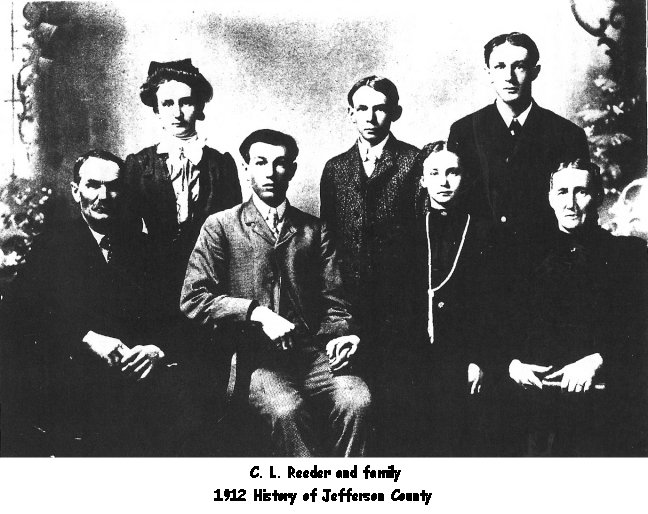