Adam F. RAUSCHER, for many years engaged in general farming in Jefferson county, but now living retired in Lockridge, was born in Koenigsbach, Amt Durlach, grand duchy of Baden, Germany, on July 4, 1842. Mr. RAUSCHER is proud of the little Baden village in which he first saw the light of this world and wants his children to always keep in kind regard the place, wherefrom the family sprung, and which was the boyhood home of their father. His parents were Adam F. and Salme (FRANTZ) [sic - TRAUTZ] RAUSCHER, also natives of the fatherland. Adam F. RAUSCHER, who was a stone mason, together with his wife and family emigrated to the United States in 1854, arriving here in the month of April. He located in Pennsylvania, where he followed his trade until October of that year when he removed to Ohio. The family continued to reside in the Buckeye state until 1857 when they again started westward, Iowa being their destination. They settled in Story county, the father resuming his trade but as work was scarce he leased a farm, which he operated one season. He had a fine crop of corn, but the market was over supplied with this product and times were very hard, so he not only found it impossible to sell his grain but could not trade it. Necessity compelled him to again change his location, so he and his family went to Des Moines, where he found plenty of work at his trade. They remained in the capital city until the spring of 1860, when they came to Jefferson county and rented a farm in Lockridge township. The operation of this land he turned over to his children, while he worked at his trade until 1865 when he had accumulated sufficient capital to enable him to buy a farm on what is now known as "Four Corners," Lockridge township. Withdrawing from his trade he devoted his entire attention to the cultivation of his homestead, upon which he resided until 1889, when he retired. For about seven years thereafter he made his home with his son Adam F., from whose home he went to live with a daughter in Fairfield, where he passed away on the 19th of December, 1898; the mother's death had occurred previously, in May, 1893.

The life record of Adam F. RAUSCHER had covered a period of twelve years when he emigrated from Germany to the United States with his parents. The greater part of his education was acquired in the fatherland, although while living in Ohio he attended the public school for one winter. He early began assisting his family, either by the contribution of his small earnings or aiding in the work of the farm. He remained a member of the parental household until he had attained his majority. At this stage he began for himself by hiring out as a farm hand. After working for a year in Jefferson county he went to Illinois where he continued to work at the same occupation until 1869. By means of close application, temperate habits and thrift he had accumulated the money necessary to enable him to buy ninety acres of land in Lockridge township, adjacent to his father's place. But eight acres of this tract was cleared, so he diligently applied himself to clearing and placing the remainder under cultivation, after which he split the rails for a fence about his land. He operated this place in connection with his father's ninety acres for several years, when he bought out the latter, making his holdings aggregate one hundred and eighty acres. He disposed of his farm in 1895 and went to Missouri, where he purchased one hundred and sixty acres that he cultivated for eight years. At the expiration of that period he sold out and returned to Jefferson county, settling down in Lockridge, where he has ever since lived retired.

In August, 1870, Mr. RAUSCHER was united in marriage to Miss Katherine KINTZ, a daughter of Christian and Barbara (MOLIS) KINTZ (sic - KIENTZ), also natives of Germany. The father emigrated to the United States in 1836, first locating in Columbus, Ohio, where he remained for four years. In 1840 he came to Jefferson county and entered land in Walnut township. He immediately set about clearing and improving his property, continuing to add to his holdings from time to time, until he had acquired two hundred and fifteen acres. He continued to operate this place until his death on the 4th of May, 1892. The mother survived for five years thereafter, her demise occurring in September, 1897. Mr. and Mrs. RAUSCHER were the parents of eight children, as follows: Frederick William, who is residing in Lockridge; Ernest Theo, who is engaged in farming in Lockridge township; Martha R., the wife of Henry ACHENBACH, a farmer of Iowa county; Henry M., who is an implement dealer in New London, Iowa; Herman R., who is engaged in the same business in Mount Sterling, Iowa; Karl L., who is a harness dealer in New London, Iowa; Christian A., manager of the Lumber Company of German Valley, Illinois; and Bertha C., who was born and died in 1877.

In religious faith Mr. and Mrs. RAUSCHER are German Lutherans, and politically he is a democrat. His untiring energy and capable management enabled Mr. RAUSCHER to acquire a comfortable competence and he is now one of the stockholders and a director of the Lockridge Savings Bank. He is one of the many fine citizens Germany has given the United States, whose energies have been devoted to the developing and upbuilding of the great middle west. 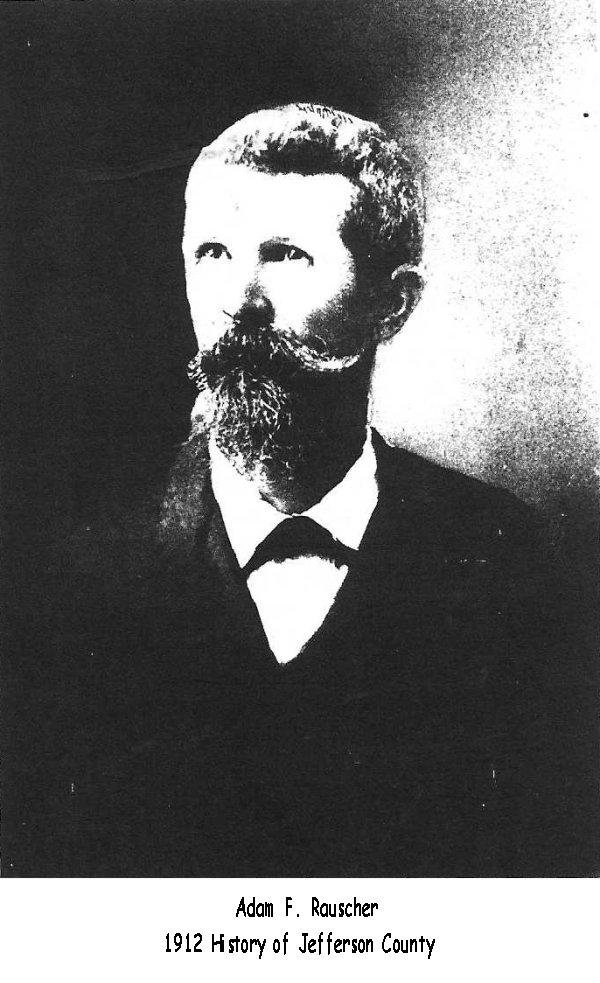