John HERON, who has been a resident of Jefferson county for fifty-five years, is numbered among the prosperous agriculturists of Lockridge township, where he owns a valuable farm of two hundred and fifty-seven acres. He was born in Clinton county, Pennsylvania, on October 24, 1840, and is a son of David and Jeannette (McGEE) HERON, natives of Scotland. The father, who engaged in mining in his native country, emigrated to America in 1828, first locating in Nova Scotia. After residing there about a year he removed to Pennsylvania, working in several mining districts and finally locating at a place called Queen's Run. There he became associated with two other men in mining operations, the general mercantile business and the manufacture of brick. This connection continued for nine years at the end of which time they disposed of their interests and each bought a farm and engaged in agricultural pursuits. Mr. HERON invested in two hundred acres of land that he cleared and improved devoting his energies to its cultivation for nine years. Disposing of his property in 1857 he again started westward, Iowa being his destination this time. Upon his arrival here he located in Jefferson county, buying two hundred acres of land in Lockridge township, but six acres of which was cleared, much time and labor being required to place the tract under cultivation. He later erected a grist mill upon the creek running through his land, its operation as well as that of his farm engaging his attention until his death, which occurred September 9, 1872, at the age of sixty-eight years. The mother survived fifteen years thereafter, her demise occurring on the 25th of June, after she had passed the eighty-first anniversary of her birth. Seven children were born of the marriage of Mr. and Mrs. HERON, four of whom are living: Elizabeth, who is seventy-six years of age, residing upon the old homestead with her brother and sister; Mary J., aged seventy-three, the widow of J. N. BOVEE, of Seattle, Washington; Theresa I., who is fifty-eight years old, also living on the old homestead; and John, our subject.

John HERON was reared to the age of sixteen years in his native state, to whose public schools he is indebted for the greater part of his education, having attended school but one term after coming to Iowa. Being a son of pioneer settlers upon him early devolved the hardships and privations incident to life in any new country. He remained at home with his parents until the breaking out of the war, when he enlisted and went to the front as a member of Company E, Second Iowa Infantry. He remained in the service for three years, receiving a wound at Atlanta that incapacitated him for a time. Upon receiving his discharge he returned to his father's farm and again resumed the duties of civil life. The property came into his possession upon the death of his father, and there he has ever since resided with his two unmarried sisters, engaging in general farming and stock-raising. He has intelligently and diligently applied himself to both branches of the business and as a result has met with a gratifying degree of success. In addition to his extensive realty holdings, Mr. HERON is president of the Lockridge Savings Bank, of which institution he was one of the organizers. He has long been considered not only an able agriculturist and stock-raiser but a capable business man, whose efforts in the development of his personal interests have been so intelligently directed as to redound (sic) to the benefit of the community at large.

Mr. HERON has never married and with his two sisters makes his home upon his father's old farm. They affiliate with the Baptist church, and politically he is a republican, and has always taken an active part in local governmental matters. He is held in high esteem by his party and represented his district in the Seventeenth general state assembly. Many changes have taken place in Lockridge township during the half century and more he has been a resident here, following the advent of a newer and more progressive period of development in which he has been one of the factors. 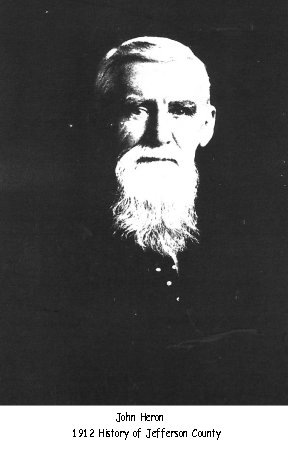